The loss of a successful young sire is devastating and so Australian breeders are lucky to have several high-class sons of Northern Meteor at stud. Talented Eurozone was a Gr.2 winner and Gr.1 runner-up in a brief career and now the Newgate Farm sire, already popular with breeders, is proving a hit with yearling buyers as his first youngsters are sold this year.

THE theory of six degrees of separation was never more apposite than when discussing thoroughbred pedigrees and Eurozone (Northern Meteor-Miss Vandal by Don’t Say Halo (USA)) is a case in point. His pedigree is Danehill free, a very useful selling point when local bloodlines are so crowded with that horse, but contains many stallions who have crossed well with that nine-times Champion Australian Sire.

In fact the young stallion’s top priced lot at the recent Inglis Classic Sale, the $80,000 colt from Winged Medusa (Fusaichi Pegasus) has a second dam by Redoute’s Choice, a multiple champion sire son of Danehill, while his second top lot, a colt from Beaver Rocks who made $55,000, has a dam by another champion Danehill son in Fastnet Rock. When you also consider his own sire, the ill-fated Northern Meteor, the Leading First Season Sire of 2012-13, got Gr.1 winners Cosmic Endeavour (Danehill), Zoustar (Redoute’s Choice) and Speak Fondly (Flying Spur) from mares by Danehill or his sons you can see why breeders have “got with the program”.

It also helps that the handsome chestnut, whose fee at Newgate Farm, Aberdeen, in 2016 was $13,750, was a very good galloper, winning four races to Gr.2 level and placing in Gr.1 company in just 10 starts for trainers Bart and James Cummings. Racing for Dr Michael Alexeef, Dato Tan Chin Nam and Tunku Ahmad Yahaya, Eurozone was unbeaten in two starts at two. He stepped out on debut at Canterbury on June 19, 2013 after two trial wins in the previous three weeks and defeated Suit by a quarter of a length over 1100m on a soft track, before winning at 1200m at Rosehill on July 6, beating Bull Point by three-quarters of a length on a soft track.

Given a short break, he provided James Cummings, who had joined his grandfather in a training partnership at the start of the new season, with his first stakes win on August 10 that year, winning the Listed Rosebud (1200m) at Randwick on August 10 from eventual $2m earner and five-time Gr.1 winner Dissident (Sebring), Australia’s Horse of the Year for 2014-15 and also on the roster at Newgate. He has 1.25 lengths to spare from that galloper, with Dowdstown Charlie a half-length back third, and was going away from the field at the finish, running 1:11.84 on track rated soft (7).

“He’s a better horse ridden with cover, but he jumped well and no one wanted to lead, so I opted to let him do his own thing out in front and he did the rest,” jockey Hugh Bowman said. “I’m delighted to be part of James’ first stakes winner and at Randwick too.”

Unplaced in the Run to the Rose-Gr.3 and Golden Rose-Gr.1, he was back in the winner’s circle on September 28, beating subsequent four-time Gr.1 winner and Cox Plate second Criterion into second in the Stan Fox Stakes-Gr.2 (1500m) on a good track at Rosehill (1:30.15). Eurozone had a break of 19 weeks before resuming in the C.F. Orr-Gr.1 (1400m) at Caulfield and went down “a lip” to Moment of Change and with Shamus Award third (1:23.0) on February 8, 2014, was then fourth (1.7 lengths) behind Shamus Award in the Australian Guineas-Gr.1 on March 1 at Flemington. Eurozone was third (1.1 lengths) behind Dissident in the Randwick Guineas-Gr.1 on March 14 and was retired with earnings of $476,080 after being injured when last of 15 in the George Ryder-Gr.1 on March 29. He had four wins, a second and a third and eight of his 10 starts were in black type events.

In announcing Eurozone was joining the stud’s roster in 2014, Newgate’s Henry Field said he was delighted to have a Gr.1-performed son of Northern Meteor to offer breeders. “He was an unbeaten two year-old and one of the top rating three year-olds, so he ticks all the boxes,” he said.

Northern Meteor won the Ascot Vale (Coolmore) Stakes-Gr.1 and was runner-up in the T.J. Smith-Gr.1 before proving a sensation is his brief stud career, leaving the winners of $22m. His 19SW include six at Gr.1 level. He had six sons at stud in 2016 including triple Gr.1 winner Zoustar (Widden/Woodside), Gr.1 winner Shooting to Win (Darley), Gr.2 winner Deep Field (Newgate), Listed winner Fighting Sun (Sun Stud) and Listed winner Sports Edition.
Eurozone, a grandson of champion sire Encosta de Lago, hails from a family that has been in Australia for many generations yet has a link to one of the breed’s more influential sires in Friar Marcus. Those who subscribe to the “six degrees” theory, that all living things and everything else in the world is six or fewer steps away from each other, will find some very obvious connections in the immediate pedigree of Eurozone, although the link mentioned above is a bit more removed in his female line.

There are some pretty high powered thoroughbreds indeed in his male line as his short lived sire Northern Meteor is by a multiple champion sire Encosta de Lago, himself a son of Fairy King (USA), a brother to breed shaper Sadler’s Wells (both sons of Northern Dancer). Encosta de Lago’s dam Shoal Creek (Star Way (GB)) is a daughter of Rolls (USA) (Mr. Prospector), dam of Golden Slipper winner and sire Flying Spur (Danehill (USA)) and from the Sir Ivor mare Grande Luxe, a daughter of Northern Dancer’s champion daughter and producer Fanfreluche, also second dam of Aquis Farm shuttler Holy Roman Emperor (IRE), a Gr.1 performer and sire and a son of Danehill, whose daughters could be a good fit with Eurozone.

Northern Meteor’s dam, Explosive (USA), is by Mr. Prospector’s influential sire son Fappiano and hails from the same family as Fairy King, Sadler’s Wells and their three-quarter brother Nureyev. Explosive’s second dam, Moccasin (Nantallah-Rough Shod by Gold Bridge), a US Horse of the Year and Champion Two Year-Old Filly, is a sister to Champion Two Year-Old colt and sire Ridan, stakes winner and successful sire Lt Stevens and to stakes placed Thong, dam of Thatch, Lisadell and their star broodmare sister Special, the latter dam of Nureyev and second dam of Fairy King and Sadler’s Wells via her daughter Fairy Bridge (Bold Reason). This gives Eurozone another immediate pedigree “hook” to a large part of the broodmare band and inbreeding to the Rough Shod clan has worked well.

Eurozone’s dam Miss Vandal, who counts the WATC Sires’ Produce-Gr.3 among her four wins (1000m-1400m), is a daughter of Gr.2 sprinter-miler Don’t Say Halo (USA), whose sire, Gr.1 winner and champion sire Halo (Hail to Reason-Cosmah by Cosmic Bomb) is out of a mare who is a half-sister to Natalma, dam of Northern Dancer and third dam of Danehill. Natalma’s sire Native Dancer is also grandsire of Raise a Native, sire of Mr. Prospector.
The mare was owned by Dr Philip Chen, long serving Hawkesbury Race Club Committeeman (and Hawkesbury RC doctor) who is an even longer term thoroughbred owner and breeder, having been owner or part owner of such outstanding gallopers as Mr Bureaucrat and All Black Gold among others as well as being the successful breeder of Gr.1 performer Eurozone.

Halo of course is best known via his Kentucky Derby winner and breed shaper Sunday Silence and also his largely South American-based son Southern Halo (out of a mare by Northern Dancer). Southern Halo’s US-bred son More Than Ready, a Gr.1 winner and champion sire for Vinery in Australia, shares a link with Don’t Say Halo in that they are both descendants of that marvellous mare La Troienne.
Shooting to Win and Deep Field, talented sons of Northern Meteor, are from a mare by Elusive Quality (also sire of Sepoy, at Darley), whose dam sire, Hero’s Honor (Northern Dancer), is also from the La Troienne line. For those into the “six degree” theory then mares carrying La Troienne/Halo and more lines of Native Dancer should work with Eurozone.

Eurozone’s dam Miss Vandal also left the Gr.3 winner Miss Marielle to a mating with Encosta de Lago and Eurozone’s three-quarter sister is already dam of Coolmore Classic-Gr.1 winner Peeping (Redoute’s Choice). Second dam Zabatac was unplaced but produced five winners, two of them black type, the other being WA Listed winner Krystal Storm (by the Kenmare son Metal Storm (FR)). Her sire, Zabaleta (USA) (Shecky Greene-Winver by Vertex) did a good job in WA and his 11SW include Gr.1 winner Lady Kariba. Importantly, he introduces a line of Star Kingdom (IRE) into this pedigree as he is a grandson of Cox Plate winner Noholme (Star Kingdom-Oceana (IRE)) by Colombo), a brother to the first Golden Slipper winner in Todman).

Star Kingdom (Stardust-Impromptu by Concerto), our greatest sire in recent times before Danehill came along, is everywhere in the further removes of Australian pedigrees. His sire, a son of another breed shaper in Hyperion, is out of a mare called Sister Stella, by Friar Marcus, a champion at two in England, sire of Portlaw and broodmare sire also of Bahram.

The family came to Australia in about 1930 with the importation of the Son-in-Law mare Chaptrel (GB), foaled 1927 and Eurozone’s eighth dam. Her dam Neuve Chapelle (Sunstar) is a half-sister to Friar Marcus (Cicero), both being from Prim Nun (Persimmon-Nunsuch by Nunthorpe). Sunstar is also broodmare sire of Sister Stella, proving wherever you look you will find an example of the “six degrees” theory. It really is a useful tool when looking at pedigrees.

All this certainly made breeders keen on Eurozone and he covered 167 mares in 2014 for 124 live foals, 127 mares in 2015 (90) and 123 mares in 2016. While the loss of his sire in July 2013 was a bitter blow for Widden Stud and his owner/breeder Gooree Stud after only four seasons at stud (2009-12), it’s good to know his genes will live on through his sons and daughters at stud and that Eurozone is being given every chance to continue his legacy. 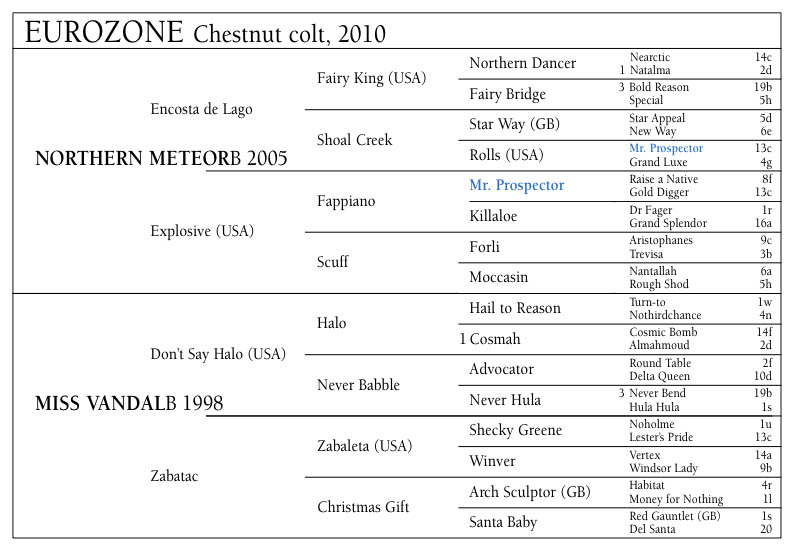