“Show class, have pride, and display character. If you do, winning takes care of itself.”
Paul Bryant – American football player and coach who knew a thing or two about winning.

As thoroughbred breeders and owners we all want to win, it’s in our DNA. But winning isn’t enough, we are all aiming for the top of the mountain, we all want to win those Gr.1 races, the ones that establish the key values and parameters in our industry.

Horses that can win at Gr.1 level are said to be high class, multiple Gr.1 winners are very high class and occasionally champions. Those that are dropped back into lesser races usually have too much class for their rivals and win regularly in lower grades unless very harshly weighted.

But how can we measure “class”, is there a standard definition of the term in thoroughbred racing? Apart from the case outlined above, there are many different ways to approach such a measurement. It can be done by visual observation by an experienced racewatcher, it can done by analysing race times and sectional times, it can be done by formulating and comparing ratings. Take your pick, the list goes on.

Recently while analysing various sire lists, nicking patterns and inbreeding data, it became apparent to me that certain mating patterns, whether simple (such as outcomes for a single stallion) or more complex, produce quite significantly varying numbers of Gr.1 winners compared to their total number of stakes winners.

While researching this idea I came across an old article in my files in which Roger Lyons analysed what he called “the class factor.” Roger Lyons was the late Jack Werk’s partner in establishing Werk Thoroughbred Consultants (WTC) and is the programming genius behind both WTC and Compusire. He found when examining around 15,000 unrestricted stakes winner in North America, that around 13% were Gr.1 winners. That is the benchmark.
It seemed worthwhile testing this idea in Australia and my research over several seasons of stakes winners came up with a figure of 12.5% Gr.1 winners to stakes winners. This number is very close to Lyons’ benchmark and is slightly more conservative, so I decided to use the 12.5% as a standard figure to test the efficiency of various mating outcomes, to test their “class factor.”

If a certain type of mating produces 12.5% Gr.1 winners to stakes winners it could be considered to have a class rating index (CRI) of 1 (equal to the benchmark), and if it has less than, it is “underperforming”, while if it has more, then it has a superior CRI. If you get a good horse bred on that mating you have a better than average chance of getting a ‘real good one,” a horse of the highest class, a Gr.1 winner.

This concept is relatively easy to understand and to examine for various types of matings, but as with all pedigree matters some human judgement and discretion should be applied to the results and will often give an even better understanding of what is going on.

One way to look at this matter of “interpretation” is to cite the case of matings by using either the leading sire or by using the cross of the leading sire over the leading broodmare sire. These horses are “by definition” the very best, the highest class, so you would expect such matings to have a CRI of 1 or greater. A CRI of say 2 or more, would be extraordinary for such matings. A real winner. In fact, a contrarian view would be that if you are using the most expensive and highly commercial stock, you can be slightly forgiving on the class rating. The sheer numbers generated by the most commercial sires and broodmare sires, the very numbers that made them champions, mean that breeders might be happier with an “average” outcome for a horse by the champion sire Danehill than a better than average outcome by a lesser stallion.

Enough background, now it is time to look at some specific cases, starting with two of the greatest names in modern pedigrees, Danehill, 1986 and Sadler’s Wells, 1988, two near contemporaries who dominated world pedigrees into the millennium. 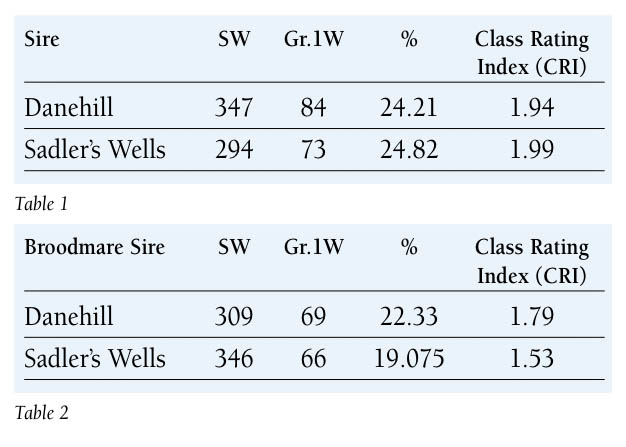 Danehill and Sadler’s Wells are the leading sires of individual Gr.1winners in thoroughbred history with 84 and 73 respectively. Both sires served big books of mares, Danehill shuttling from Ireland (and twice from Japan) to Australia while Sadler’s Wells spent his entire career in Ireland. They both achieved remarkable results with a huge number of stakes winners and an extremely high CRI of around 2, which means their ratio of Gr.1 winners to stakes winners was twice the average. Quality and class as well as quantity. There is very little between them as far as their CRI as sires is concerned, while at this stage Danehill’s daughters are just shading those of Sadler’s Wells in the broodmare sire CRI.

Two things are worth pointing out here. Firstly that we should allow some margin for error when making these calculations due to the vast scope of international thoroughbred racing and structural differences between jurisdictions. Thanks to the resources of Arion Pedigrees, Werk Thoroughbred Consultants and our own research at Bluebloods, the figures are reasonably reliable but it would be fair to say that the CRI for Danehill and Sadler’s Wells as sires is identical for all practical purposes.

Secondly, despite Danehill’s blazing start to his stud career in Australia and slightly slower acceptance up north, by the time the numbers were all in, his figures for both hemispheres were pretty much equal. Another remarkable achievement by a remarkable stallion.

The following tables show the numbers of Stakeswinners, Gr.1 winners, percentages of Gr.1W to SW and class ratings indexes for various combinations of the Danehill/Sadler’s Wells cross or vice versa when Danehill and Sadler’s Wells occur in various positions within the first FIVE generations of the resulting progeny. 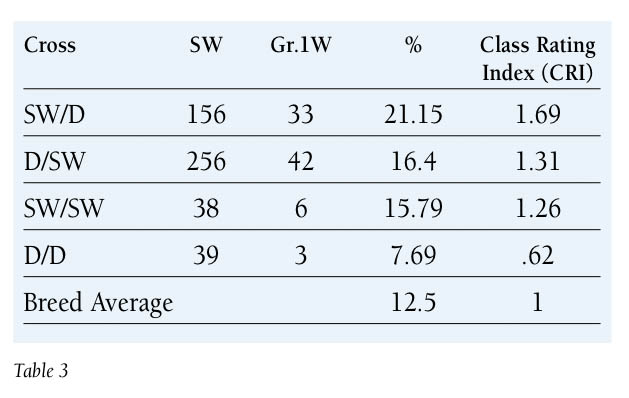 Table 3 shows SW anywhere on the sire’s side (top half) of a five generation pedigree and anywhere on the dam’s side (bottom half) of the pedigree, followed by Danehill/SW and then SW/SW and D/D by way of comparison.

Table 4 shows the same information when Danehill and SW are in SPECIFIC POSITIONS in a FIVE generation pedigree. To identify the specific positions the numbering code used is based on the KEY A which appears first, followed by Table 4. 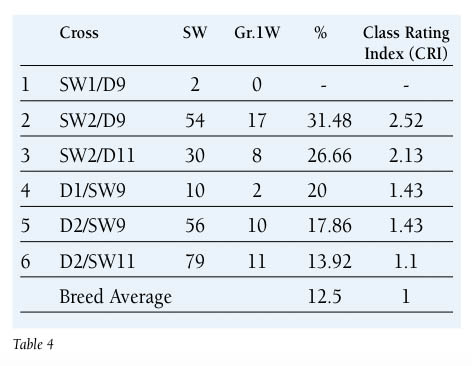 The positions are numbered only for the first three generations as TABLE 4 only covers cases where D & SW are relatively close up, with the relevant position indicated by the number from Key A. 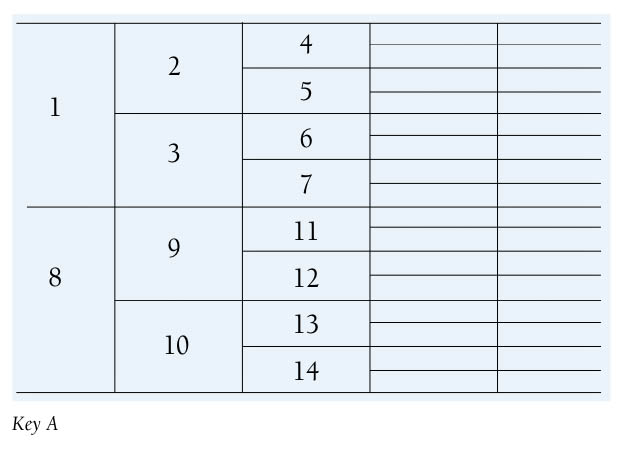 Points of interest.
Cross 2 which shows SW as the grandsire and D as the sire of the dam is the one that has produced the peerless racehorse Frankel and outstanding young sire Teofilo among 17 Gr.1 winners bred on the cross. It is one of the world’s most successful nicks (sons of SW over mares by D) and apart from its success in producing stakes winners it results in an extraordinarily high percentage of Gr.1 winners to stakes winners. It actually has an even better Class Index than either of the great sires do individually 2.52 vs 1.94 and 1.99.

Cross 3 with sons of SW over mares by sons of D is also very successful with a class index of 2.13.
Interestingly, although SW is two years younger than his great near contemporary, the various crosses with the younger sire in the top half of the pedigree are far more effective than those with Danehill in the top half and SW in the bottom (female half).

Something Of A Surprise
“My divorce came to me as a complete surprise. That’s what happens when you haven’t been home in eighteen years”. Lee Trevino.
The class index for both D and SW themselves and for most of the crosses in tables 1, 2, 3 and 4 are all above the average, some of them very much so, up to twice the norm. The one big surprise is for the Danehill/Danehill cross itself, not just in the direct sire and broodmare sireline but with Danehill anywhere in the top half of a five generation pedigree and Danehill anywhere in the bottom half of the pedigree. Results for this cross are surprisingly poor, barely half as good as average with a class factor of .62 which means that only 7.69% of the SW bred on this cross are Gr.1 winners.

Undoubtedly the sample of 39 SW is relatively small, but this cross is becoming very common in current pedigrees, particularly in Australia where Danehill rose to prominence so early in his career. In recent times almost one third of all the 200 plus sires represented in STALLIONS (the Bluebloods published) stallion register have traced directly to Danehill in the sireline. We will certainly see many more runners bred on this cross, more SW and more Gr.1 winners, but it will be fascinating to see if the CRI improves, particularly as Danehill starts to move into the fourth and fifth removes of each individual horse rather than occurring in the second, third and fourth removes as he so often has in recent years.

The Last Word.
An important last word on these proceedings is that at no stage have total number of foals, total number of named foals or total number of winners ever been mentioned when discussing success rates in this article. This is not an error, not an oversight as you might think, but rather a deliberate attempt to examine only what Donald Lesh described as “the effective breeding population”, the pool of unrestricted stakes winners.

If two young sires both had 100 starters for 10 SW but one had 1 Gr.1 winner and the other had 5 Gr.1 winners (out of the 10 SW), their perception and value in the commercial breeding hierarchy would be completely different. The first would be regarded as successful, even promising, while the second would be seen as the hottest young sire on the planet because he was siring “class”.

Thoroughbred breeding can be enjoyed at many levels, part-time hobby, serious interest, business venture, all consuming passion, with the funds deployed varying from restricted to virtually unlimited. Yet how many of us wouldn’t like to breed or race a horse of the highest class?

COMPARISON TABLE
Table 5 shows the CRI for some of the greatest stallions in the history of the breed, the all time leading sires of Gr.1 winners and selected others are shown. 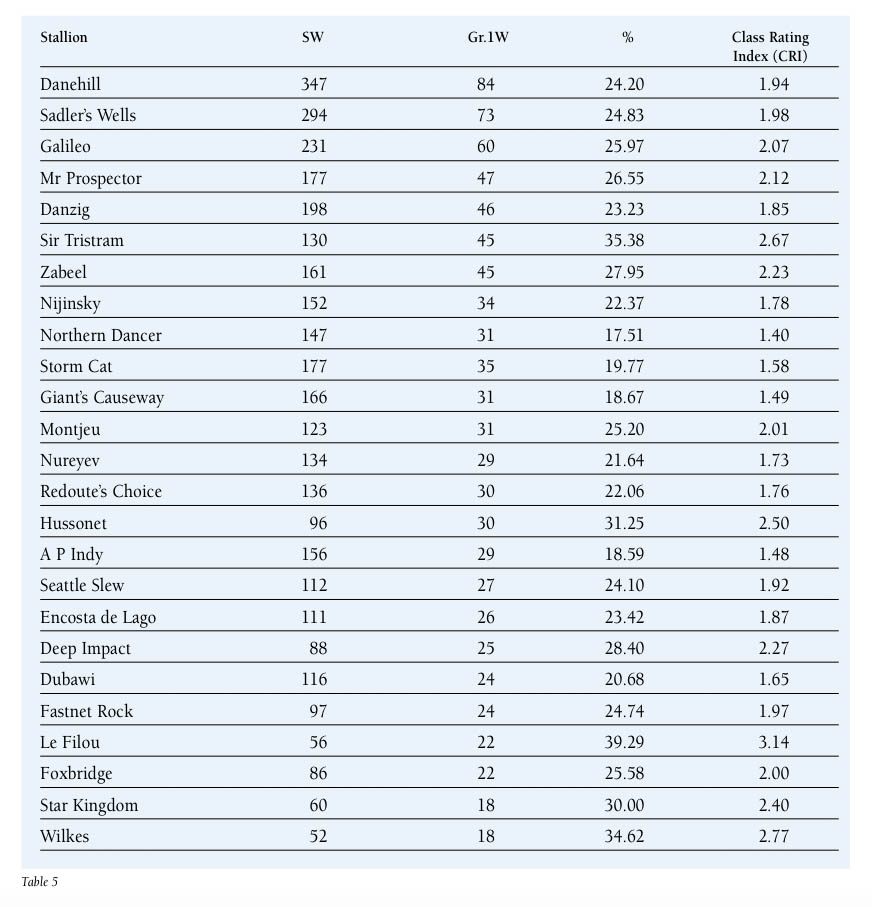