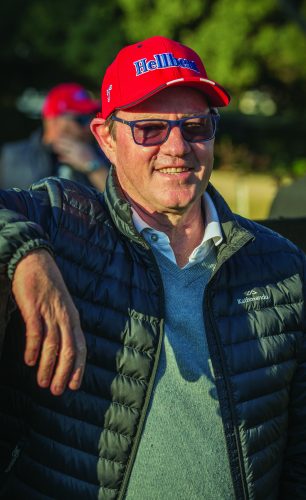 FOR many years Bill Mitchell was one of Sydney’s leading trainers with 11 Gr.1 winners to his credit. Since leaving the training ranks he has, for some seven years, been the racing manager for the Segenhoe Group while continuing to successfully act as an agent and consultant for a valued group of clients.

Combine the Hong Kong success of recent purchase Beat the Clock with the ever-evolving sale and racetrack success at Segenhoe and it’s clear Mitchell remains a leader in his craft.

Q: The Mitchell family is well known through Yarraman Park Stud but where did the connection with horses begin?
A: “Our father had a farm at Narborough in Norfolk, England, just north of Thetford, where His Highness Sheikh Hamdan now has his Nunnery Stud. As many British farmers did, Dad also dabbled with thoroughbreds on the property, both flat horses and jumpers.

“We moved in those circles, making many friends in the racing industry and so spent a lot of time down the road in Newmarket. Then in 1968, when I was eleven, the opportunity arose to buy Yarraman Park from George Moore, so Dad shipped the family, literally, from Norfolk to Scone.”

Q: Swapping East Anglia for the warmth and relative seclusion of the Hunter Valley must have been a shock to a young man heading into his teens?
A: “I think we all settled in to the Australian way of life very quickly and never thought twice about it. Living on the farm was a tremendous experience, just being in and around horses, and I got to go to Sydney for my formal education. I certainly didn’t miss the Norfolk climate and its winds, often straight off the Arctic Circle. As a young man I returned to England and did one winter, but when the following October came around I cried ‘enough’, I wasn’t having
a second.”

Q: Yarraman was a working stud farm when your family took over, what were the next steps?
A: “Dad imported a number of stallions from England, starting with Straight Master (Skymaster) who arrived for the 1969 breeding season. Of course, in those days the English would only part with handicappers or sprinters who wouldn’t find favour in their own market. Thereafter he brought in stallions like Fleeting Orbit (Fleet Nasrullah), Memento (Roberto) and Rutland (Mummy’s Pet) before turning to Australian breds like Catbird (Danehill) and Magic Albert (Zeditave). Throughout those years he brought
in a handful of nice mares from Europe as well.”

Q: So, did you see training as a natural progression once you left school?
A: “I didn’t really get into racing until I was 21 when I went over to England and, needing a job, I went to work for Fulke Johnson Houghton at Blewbury
on the Berkshire Downs. Although I’d been around horses all my life, either riding or working on the stud farm, I wouldn’t say I was interested in training horses up until that point.

“I was there at the time when Johnson Houghton had Ile De Bourbon (Nijinsky) and Double Form (Habitat) in the stables, both being European Champions. Ile De Bourbon won a King George and Queen Elizabeth Stakes and Double Form a King’s Stand Stakes and a Prix de l’Abbaye de Longchamp and it wasn’t long after he had trained the very good mare Rose Bowl (Habitat). Those stables are still getting winners, his daughter Eve won the Queen Anne Stakes at Royal Ascot this year from there with Accidental Agent (Authorized).”

Q: With that second winter approaching did you return home?
A: “I did, I came back and worked for Neville Begg for nine months. Then I was off again, this time to California to work for Neil Drysdale for a couple of years when he was a private trainer. Although his base was at Santa Anita we spent the summers in Saratoga and a lot of time travelling horses around the country.

“Unlike England, where the stables in those days basically shut down from November until late winter, California was far more like home as in winter the mornings could get cold but the days were beautiful, so you could train all year round. “When I next returned home to Australia I took out a licence and trained out of Scone while I considered how best to go about building a business. Eventually the opportunity arose to buy stables at Warwick Farm, which I did, and I trained from there for five years before moving to headquarters at Randwick in 1988.”

Q: Was there a particular win as a trainer that sticks in your mind?
A: “Every win was pretty good! I suppose From The Planet’s (Ideal Planet) success in the Epsom Handicap in 1989 was the most satisfying, given it was my first Gr.1 win. That I owned a leg of him as well didn’t hurt. When I first moved to Randwick I had two unraced three year-olds, From The Planet and Livistona Lane (Belmont Bay), two ripping-good horses. They pretty much carried me for about four years. Livistona Lane only cost $8000, won more than $600,000 and was runner-up to Super Impose in both an Epsom and a Doncaster Handicap.”

Q: It’s been well documented you trained horses of the calibre of Dignity Dancer (Zabeel) to win a Spring Champion Stakes and an Australian Guineas and Stylish Century (Double Century) to a Spring Champion, a Victoria Derby and almost a Cox Plate, so with that level of continued success what prompted the retirement from training?
A: “It was 2005 and I’d pretty much just had enough. I found the private consultancy work far more appealing, so I developed that into a business. Then in 2011 Kevin Maloney of Segenhoe was on the lookout for a racing manager and Michael Sissian filled in the dots, introducing me to him. From there I was offered the role, which I jumped at, starting in the May of that year.

Q: And what did that entail?
A: Besides looking after Segenhoe’s racing stock my brief when I started was to build the broodmare band, looking for acquisitions off the track both here and overseas. In the years after the Global Financial Crisis the then stud manager Royston Murphy and I were able to build a solid band, buying from a market that was fairly flat. A significant number of those purchases have since proven they were good value and continue to do well. Waiting to find out if your broodmares are any good is a long road but we are seeing the results now as the daughters of those high-class mares we purchased are starting to win stakes races.

“Custard (Lonhro) and Girl Hussler (Hussonet) are good examples of what we’ve achieved, they weren’t expensive and have really performed. Custard has come up with three stakes performers in a row; Serene Majesty (Fastnet Rock) won at Gr.3 level in Melbourne, Curdled (All Too Hard) won a stakes race at two in Brisbane and in between she has a nice Hinchinbrook mare called Brulee, who also picked up black-type in Brisbane as a juvenile. Girl Hussler has dropped Taking Aim (Choisir), who won the Ken Russell Memorial Classic at two and has the very handy Witherspoon (Exceed and Excel) who isn’t a stakes winner yet, but I’m confident she will be.

“One of the great benefits of breeding from 50 or so mares annually, and retaining and racing a significant percentage, is each year you will have fillies coming off the track returning to the farm. That then necessitates culling mares at the bottom of your inventory to keep the numbers manageable. Those decisions have to be made with an eye on progression and continual improvement of the stock on hand. Of course, also, when mares get to a certain age you have to determine if they are doing the job or not. It makes it an easier decision if they have got daughters coming through.”

Q: So, has there been a broodmare purchase that has stood out for you?
A: “Sister Madly (Redoute’s Choice) was a beauty. As a half-sister to Hong Kong Champion Silent Witness (El Moxie) we did have to go to the even $1m to buy her at auction, but she repaid us winning $400,000 on the track in her next four starts, including wins in the How Now Stakes-Gr.3 and Salinger-Gr.2, and then her first foal by Sepoy made $1.2m at auction. Commercially she has been a terrific mare for us.

“We also bought Set For Fame (Reset) privately and she dropped the very speedy Madeenaty (Exceed and Excel) who won the Maribyrnong Trial Stakes.”

Q: I see Sister Madly isn’t in foal this year, what plans do you have for her?
A: “She missed to I Am Invincible last season and she is booked to go to his son Hellbent. Sometimes, even with the best of mares, you have to take a step back
as you can’t keep paying the big bucks if they don’t perform. Also it often pays to shift things around a bit to make something work. Segenhoe has kept her now retired four year-old daughter Duvessa (Street Cry), who was placed at her first start for John O’Shea, while Richard Freedman has her, as yet unraced, three year-old colt Private Universe.”

Q: Along with your role at Segenhoe you’ve been credited with plenty of success in a private consultancy and advisory capacity, is that something you will continue in future?
A: “Most definitely, there’s a certain excitement of getting it right for a client. Going back, I bought and trained Snippets’ Lass (Snippets) for Francois Naude and as the dam of Snitzel and Hinchinbrook she has certainly left her mark. I’ve also had some success for Kenneth and Merrick Chung with horses like Speedy Natalie (Al Maher), who won the Adrian Knox Stakes-Gr.3 and her first foal Sweet and Speedy (Street Cry) won The Vanity-Gr.3 at Flemington.

“More recently I bought a Hinchinbrook colt out of the Karaka Ready to Run Sale of Two Year-Olds for the Chungs. Racing as Beat the Clock he’s won six of his 15 starts, a domestic Gr.2, a shade over $A2m and I don’t think John Size has got to the bottom of him yet either.”

Q: What advice would have for someone looking to start out in the industry?
A: “Learn your trade and pay attention to detail. Those two basic principles will take anyone a long way in this industry.” n