A $500,000 yearling buy, Headwater lived up to his speed pedigree, both parents being Gr.1-winning sprinters, to claim the Silver Slipper-Gr.2 at just his second start. Now based at Vinery in the Hunter Valley, the son of Exceed and Excel is an in-demand young sire whose first yearlings are creating much excitement in 2019. 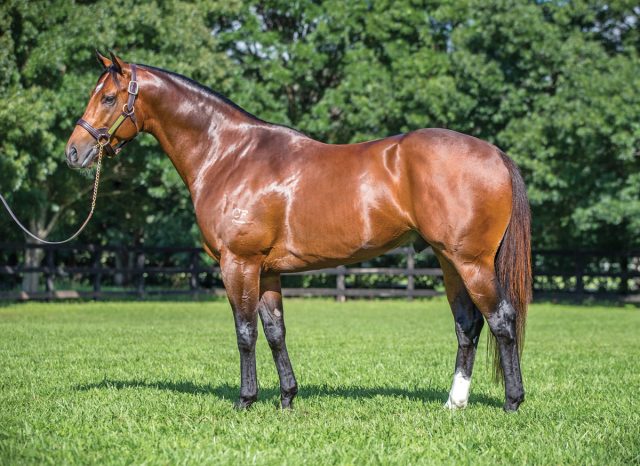 CHAMPION filly Godiva, successful in the 1940 English 1000 Guineas and Oaks and winner of six of her eight starts, sadly died of blood poisoning in the autumn of her three year-old year. She was a great loss to thoroughbred breeding, given her exalted family and the subsequent success as a broodmare of her unraced younger sister Nova Puppis.

Born five years after her classic-winning sibling, Nova Puppis was unraced but left six winners from her
11 foals including the Nasrullah-sired stakes performers Limelight and Novarullah, both sires in the US, and their sister Starullah, sixth dam of Vinery’s brilliant sprinter Headwater, whose first yearlings are under the hammer this year and were in great demand at the 2019 Gold Coast Magic Millions Sale, 10 of his Book One offerings selling to average $97,500, with a top price of $180,000, a terrific return off a $16,500 fee.

Luckily then, that the mating of Derby winner and champion sire Hyperion over modest juvenile winner Carpet Slipper, a daughter of Phalaris and Simon’s Shoes (Simon Square-Goody Two Shoes by Isinglass), was repeated to produce Nova Puppis. Otherwise we would not have the Australian branch of this family, which started with the importation of Starullah’s granddaughter Sheeaun (IRE) (by Fair Trial grandson Continuation ex Sliprullah by Solar Slipper) in the 1970s and has become a byword for speed.

Although only a modest juvenile winner in four starts, claiming the 18-runner Chesterton Stakes at Newmarket and then unplaced in two further starts at three, Carpet Slipper, foaled in 1930, is a year-older half-sister to Yorkshire Oaks-Gr.1 winner Dalmary (Blandford), whose daughters, including Jennydang (Colombo) and Rough Shod (Gold Bridge) have had such a huge impact on racing around the globe, the former’s descendants featuring Lorenzaccio and Thatching and the latter’s including Moccasin (third dam of Northern Meteor), Thatch, Nureyev, Fairy King and Sadler’s Wells. Current Queensland star sire Spirit of Boom is a great-grandson of the inbred Thatching (Dalmary 4fx5f, Hyperion 4mx4m) and his sire Thatch appears 4mx5f in his pedigree.

This means Sliprullah carries Carpet Slipper 3mx3f, as Solar Slipper is by Windsor Slipper and Starullah has Carpet Slipper as her second dam. It’s worth noting that Windsor Lad is a son of Blandford (sire also of Dalmary) and that Ridan, Moccasin and Thong (all ex Rough Shod) are by Nantallah, a son of Nasrullah, providing some interesting pedigree links for those using Headwater over mares featuring Dalmary or Rough Shod in their pedigrees. For example Northern Meteor, who carries the sisters Thong and Moccasin 5×3.

But we don’t have to delve far into history to find excellence in Headwater’s immediate family, as he’s a son of Darley’s champion sire Exceed and Excel (Danehill (USA)-Patrona (USA) by Lomond), Australia’s Champion Sprinter of 2003-04, whose resume includes wins in the VRC Newmarket-Gr.1 and MRC Invitation Stakes-Gr.1 (1400m track record).

By our nine-times champion sire Danehill (Danzig-Razyana by His Majesty), a supreme sire of sires, Exceed and Excel is a from a winning daughter of Robert Sangster’s English 2000 Guineas winner Lomond (Northern Dancer-My Charmer by Poker), a half-brother to champion Seattle Slew and three-quarter brother to Seattle Dancer. Their Gr.2-winning dam is a descendant of champion sprinter Myrtlewood, as is Mr. Prospector. Descendants of My Charmer could also work with Headwater.

One of the best reverse shuttlers and Australia’s Champion Sire in 2012-13, Exceed and Excel has left 150 stakes winners among winners of more than $150m and is a particularly good sire of juveniles, Silver Slipper-Gr.2 winner Headwater among them.

Those juvenile stars include Golden Slipper-Gr.1 heroine Overreach (Snippets), Blue Diamond-Gr.1 winners Earthquake (Marauding) and Reward for Effort (Rory’s Jester), the latter now a sire success in Victoria, Guelph (Elusive Quality (USA)), who won the ATC Sires’ Produce-Gr.1 and Champagne Stakes-Gr.1 at two and then continued that good form at three by taking the Flight Stakes-Gr.1 and MRC 1000 Guineas-Gr.1, Helmet (Singspiel (IRE)), another to claim the Champagne and Sires’ Produce at Randwick and go on to glory at three, winning the Caulfield Guineas-Gr.1 before an international stud career for Darley. Sidestep (Quest For Fame (GB)), similarly excellent at two (Pago Pago-Gr.2, runner-up Golden Slipper) and three (Royal Sovereign-Gr.2) is also pursuing a stud career.

The Oakleigh Plate-Gr.1, William Reid-Gr.1 and Goodwood-Gr.1 winner Flamberge (Blazing Sword) is one of our best older sprinters and has won 11 races and more than $1.8m, former shuttler Excelebration (GB) (Indian Ridge) was a champion miler in Europe (Queen Elizabeth II Stakes-Gr.1, Prix du Moulin-Gr.1) but unlucky to be in the same crop as champion Frankel, Mr Stunning (Dayjur) won the Hong Kong Sprint-Gr.1, Outstrip (El Prado) won the Breeders’ Cup Juvenile Turf-Gr.1, Margot Did (Shareef Dancer) won the Nunthorpe-Gr.1 on the way to being acclaimed at GB’s Champion 3YO Filly and Amber Sky (Rubiton), was a very good sprinter in HK before travelling to Dubai to claim the Al Quoz Sprint-Gr.1.

But that’s just the tip of a very large iceberg, Exceed and Excel, who works with mares by a wide variety of sires, also has black type winners out of daughters of Lecture (Seeking the Gold), Halling, Snippets, Gone West, Zabeel, Kris, Daylami, Distant Relative, Fairy King, Rudimentary, Kingmambo, King’s Best, Seeking the Gold, King of Kings, Rahy, Wolfhound, Canny Lad and Bluebird. He has several good ones out of mares
by Elusive Quality (Gone West), who shuttled for Darley, has worked well with Sadlers’ Wells line and Australian speed lines including Canny Lad and his dam sire Lunchtime (GB), Century, Vain and Star Kingdom (IRE), while champion filly Guelph has a second dam by Danehill (USA).

Owners of Exceed and Excel’s daughters will not have missed that Godolphin’s champion filly Alizeeis by Sepoy (Elusive Quality-Watchful by Danehill), while her dam Essaouira is a daughter of Exceed and Excel from Alizes, a daughter of Rory’s Jester in a pedigree also featuring Century, Star Kingdom and Sir Tristram. Her half-brother Tassort (Brazen Beau) is by a sire inbred to Danzig and Bletchingly. Sepoy daughters seem certain to suit Headwater.

Headwater’s immediate female line shows a similar concentration of this Star Kingdom speed as his dam River Dove has Bletchingly 3mx3f and her dam Ride the Rapids is a granddaughter of Noholme (Star Kingdom). River Dove won eight races at 1000m-1100m including the Oakleigh Plate-Gr.1 so Headwater is a rare product of the winners of two of our major sprints (Newmarket-Oakleigh Plate), no wonder he came to hand early and went like the wind.

Speed sire Bletchingly (Biscay) is out of Coogee by Relic (War Relic), winner of five of his seven starts including the Hopeful Stakes at two. Relic is also sire of Eclipse Stakes winner Pieces of Eight, whose daughter Eight Carat (GB) made such an impact in Australasia, leaving five Gr.1 winners including Octagonal. That horse’s Golden Slipper-winning grandson Pierro has shown a distinct liking for all things Danehill (especially Redoute’s Choice) and his daughters look a really good fit with Headwater.

Hurricane Sky is a three-quarter brother to Shantha’s Choice (by Canny Lad and dam of Redoute’s Choice) and to Gr.1 winner and sire Umatilla (Miswaki). Umatilla also landed a Gr.1 at two (Karrakatta Plate), while Redoute’s Choice was unbeaten at that age when his two wins included the Blue Diamond-Gr.1. His descendants could also be a good fit with Headwater, as could daughters of I Am Invincible, another Danzig-line sire from a daughter of Canny Lad.

Ride the Rapids is by Champion Sprinter River Rough, a dual winner of the VRC Sprint Classic-Gr.1 (then called the Pure-Pak Stakes) and twice winner of the Lightning when it was a Gr.2 event (now Gr.1). He is by the US Gr.2 winner Brigand (USA), a son of exported Cox Plate winner Noholme (Star Kingdom) and the top flight NZ filly Lady Sybil (Count Rendered), the latter, winner of a VRC Oaks and Caulfield Guineas, is also found in the pedigree of successful sire Beautiful Crown (USA)) via her outstanding daughter Amerigo Lady. River Dove has Star Kingdom 5mx5m,5m.

The team Hawkes-trained youngster, a $500,000 Easter purchase, met four other unbeaten runners in seven-strong field and turned the race into a procession and Michael Hawkes described Headwater as a “super colt” after the win. “Headwater has been a natural since day one,” he added.

“That was a quality performance and the win speaks for itself. He did everything right and beat some quality horses,” jockey Blake Shinn said. “This colt jumps, he travels and can sit behind. He has acceleration, the looks and is the complete package.”

Headwater was then third behind Vancouver and Furnaces in the Todman-Gr.2 (1200m) and then a close fifth (of 16) in the Golden Slipper-Gr.1, beaten 1.9 lengths by Vancouver on March 21.

His four starts between August and mid-October 2015 proved winless when co-trainer Wayne Hawkes said
he “wasn’t quite right”, although he was fourth behind Buffering in the Moir-Gr.2, beaten 1.5 lengths.

There were 116 live foals in that first crop and the first of them were on show at the Magic Millions in early January. Ten of his 13 lots catalogued in Book One sold (two passed in, one withdrawn) for $975,000, to average $97,500 and with a top of $180,000 for a colt from The Carnival (Encosta de Lago) being knocked down to Hong Kong buyer Ricky Yiu. Another HK buyer, Michael Chang, went to $150,000 for the colt from Academy Idol (Made of Gold (USA)), while HK buyer George Moore outlaid $100,000 for the colt from Holder Sunset (Shamardal (USA)).

Headwater has a huge draft (42) catalogued for the Inglis Classic (February 9-14) in Sydney and a further 11 yearlings at the Inglis Premier (March 3-6) in Melbourne and they are sure to be in demand.

“He is a horse of immense quality and is the son of a proven sire from a strong stakes winning family. He should appeal to commercial breeders as he has everything they want.”

It’s a sentiment being echoed by buyers too who recognise that a fast Danehill-line sire from a speed family is just the ticket to throw juvenile winners.

Did I mention his dam won the Oakleigh Plate? n