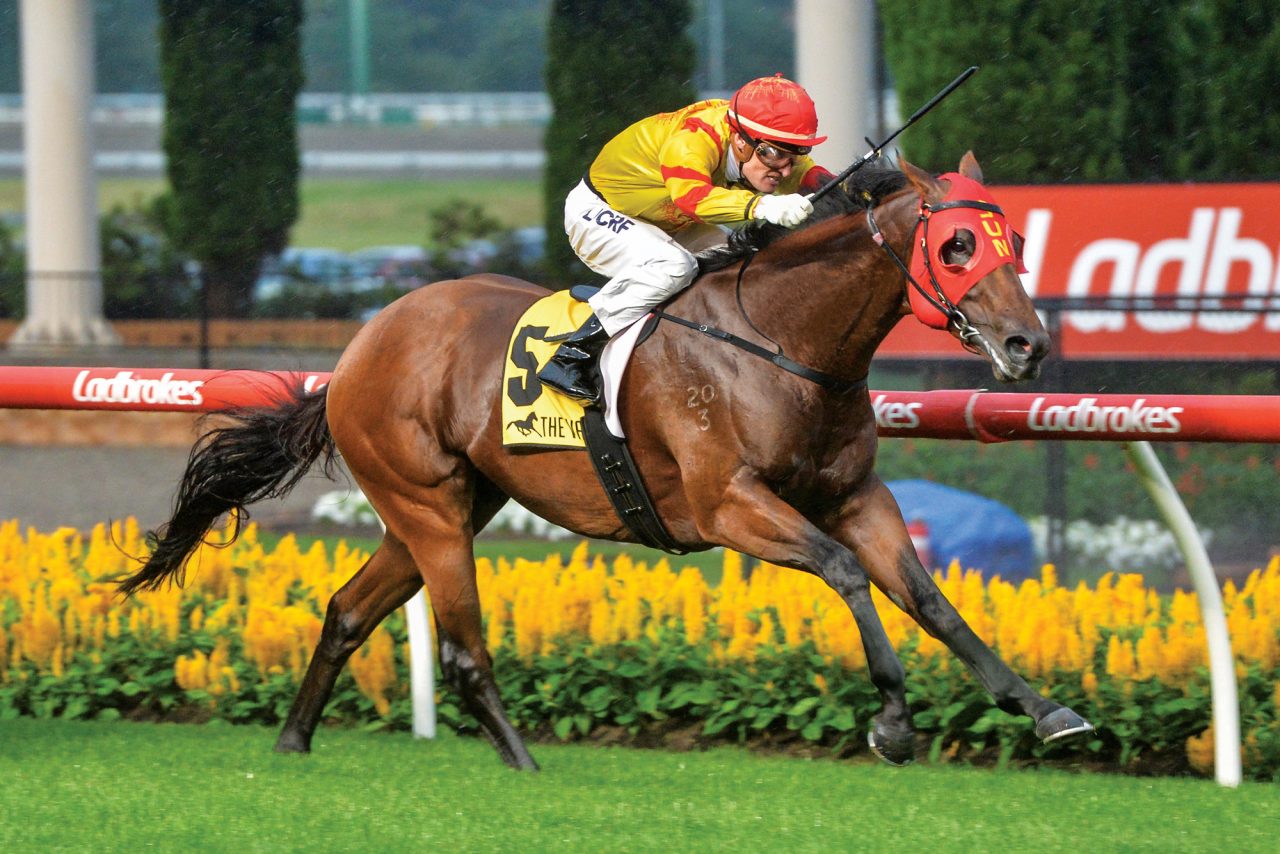 One of the most accomplished stallion families in recent years has been the one tracing back to Helen Street, featuring Street Cry and his nephew Shamardal. Both have been in the news recently but for altogether different reasons. Whereas Street Cry’s son Trekking added a second G1 victory to his resume, it was sad to hear that Shamardal passed away at a relatively young age of 18.

The acquisition of Helen Street by Sheikh Mohammed after her racing career was symptomatic of how great racing and breeding dynasties are formed. One great nursery, Ballymacoll Stud – owned by Sir Michael Sobell, selling a precious jewel to help underpin future Ballymacoll success, whilst bestowing on Sheikh Mohammed an opportunity to start something brand new for himself. In its formative years, Darley was always on the look out for potential top-class mares. In fact, one of Helen Street’s adversaries back in 1985 was fillies’ Triple Crown winner Oh So Sharp, who raced in Sheikh Mohammed’s colours after her acquisition as part of Dalham Hall Stud and its bloodstock. Oh So Sharp ended the year rated 131 by Timeform, compared to Helen Street’s 123. But 1985 was a banner year for three-year-old fillies in Europe and a 123 rating is sometimes good enough to top the class.

Helen Street emulated her dam Waterway by winning the G3 Prix du Calvados at two, before finishing second to Oh So Sharp in the G3 Fillies’ Mile at Ascot. She added the G1 Irish Oaks to her resume at three, her only victory in seven outings that year. But she put up some sterling efforts in defeat too, notably when finishing fourth in both the G1 Champion Stakes and G1 Washington DC International.

Thirty-five years on, we now know that Oh So Sharp had her moments in the spotlight as a broodmare – she produced a G1 winner and was grandam of a St Leger winner – but it was Helen Street that would eventually contribute even more to the rich history of Darley and Godolphin. That said, for a number of years the purchase of Helen Street didn’t looked like the right decision as none of her first seven foals amounted to much on the racecourse, despite visits to the likes of Danzig (twice) and Sadler’s Wells. It was her visit to Dalham Hall resident Machiavellian in 1992 that offered the first glimmer of hope. The resultant filly, Helsinki, ran third in a 2,000m Listed race in France and prompted a second visit to Machiavellian five years later, from which came the top-class Street Cry. Another Stakes winner, Historian (by Pennekamp) followed a year later. 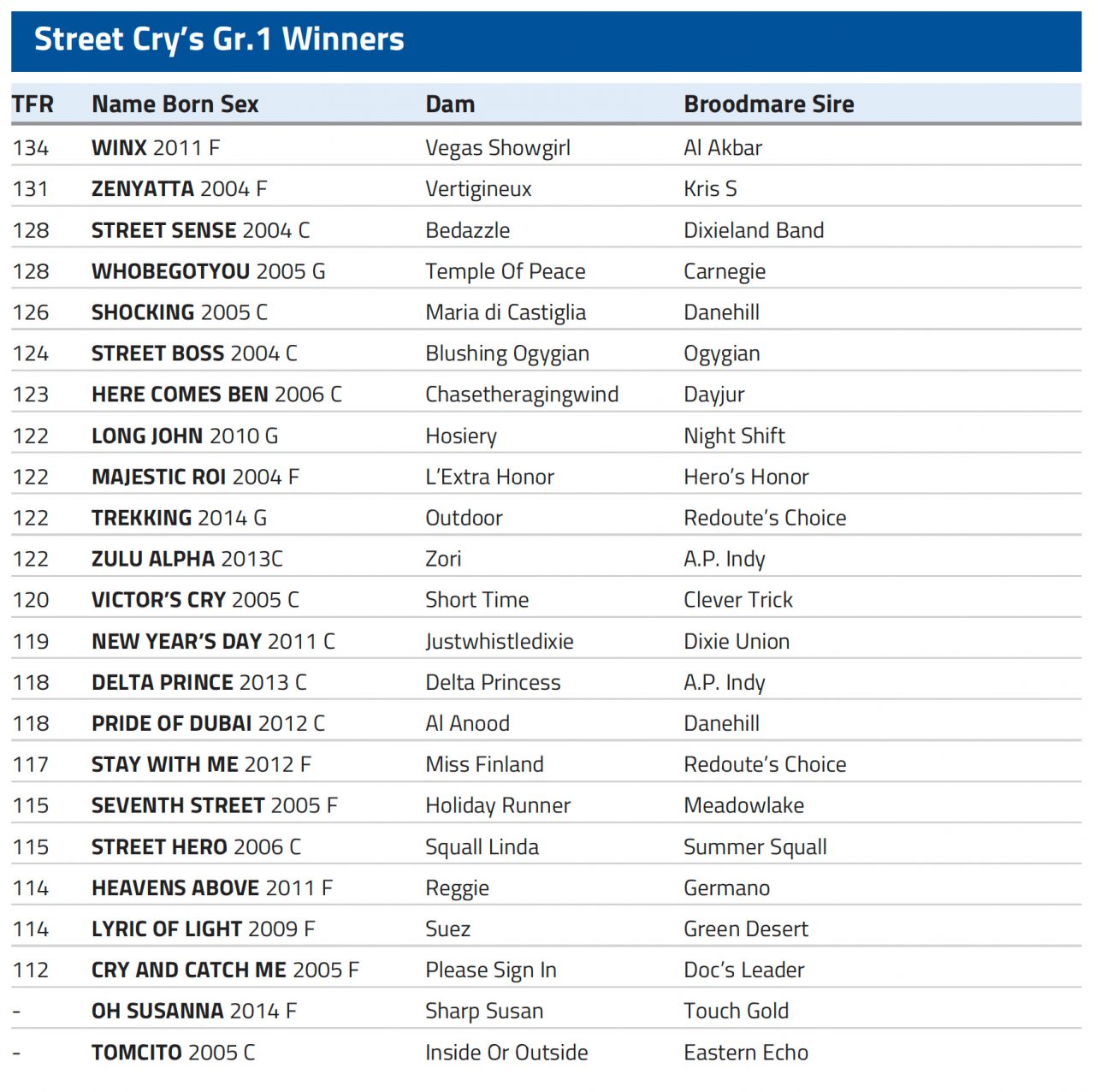 For one reason and another neither Street Cry nor Shamardal had entirely satisfactory careers in Australia. Street Cry visited nine times in all, but had a two-year gap after his first two seasons, while Shamardal spent only five seasons in Australia, again missing a year after his first two seasons. Shamardal’s Australian record stands up to scrutiny. He sired 26 Stakes winners, including the top-class Timeform 130-rated Hong Kong superstar and multiple G1 winner Able Friend, plus G1 Epsom hero Captain Sonador and dual G1-winning three-year-old filly Faint Perfume. Though his time in Australia was short, his 26 Stakes winners account for 10.2% of his starters – a top-class return. Even more impressive is his 19.4% Stakes winners to runners from elite mares.

Of course, Shamardal enjoyed a brilliant season in Europe last year with three individual G1-winning juvenile colts, featuring his best ever racehorse in the Timeform 134-rated Pinatubo, plus top-class sprinter Blue Point, the only horse ever to win three G1 sprints at Royal Ascot. It’s no surprise that Blue Point is proving very popular with breeders since it was announced he’s to stand at Northwood Park in Victoria later this year. After all, Australian breeders have every reason to believe in Shamardal as a sire of sires following the success of his son Lope de Vega.

Street Cry never quite matched Shamardal’s efficiency. His 79 Stakes winners sired in Kentucky were produced at an almost identical rate of 8.5% to the 52 he sired in Australia. Shamardal’s European tally stands at 121 Stakes winners or 11.8%, so both his northern and southern strike rates exceed 10%. What’s not in dispute is the quality of Street Cry’s best runners according to Timeform with Winx (134), Zenyatta (131) and Street Sense (128) comparing very well to Shamardal’s three best of Pinatubo (134), Blue Point (131) and Able Friend (130).