Choisir had the whole world talking when he snatched two of England’s premier sprints in 2003 and that feat set him up for a successful international stud career. Now in a “coals to Newcastle” scenario his best northern sons are doing shuttle service to Australia, including Darley newcomer The Last Lion (IRE), a juvenile Gr.1 winner who heads to the Hunter Valley in 2017.

IF CHOISIR had a fan club I’d sign up immediately as I believe this trail blazing champion sprinter is perhaps the most underrated sire in Australia. That’s why I’m delighted his best sons are being given their chance by major studs in both hemispheres and breeders should be too.

Perhaps Middle Park Stakes-Gr.1 winner The Last Lion (IRE), who shuttles to Darley (Kelvinside) for the first time in 2017 and will stand at just $13,200, deserves the title as Choisir’s toughest and most consistent juvenile. He kicked off his career in an early juvenile race of the British flat season with a win in the Doncaster Brocklesby Stakes (5f) on April 2, 2016 and had his 10th start of the season on September 24 that year, defeating a high-class field which included five other Group winners, in England’s major six-furlong test for the youngsters on a firm Newmarket track in the Middle Park. He’d won four of those 10 starts, including a Listed and a Gr.3 event on top of his Gr.1 to earn a Timeform of 114, was four times second (including a dead-heat) and twice third (once when demoted from second), so was never out of the first three, a point not lost on his trainer Mark Johnston.

“He will surely go down in history as one of the best and toughest horses I ever trained,” he said. “He is the type of horse every owner and trainer dream of. He truly is a lion of a horse, but I hope he’s not the last, as I am looking forward to training his progeny and I dearly hope there are many just like him.”

As well as being a son of Australian and British Gr.1 winner Choisir (Danehill Dancer (IRE)-Great Selection by Lunchtime (GB)), sire of more than 450 winners (81SW), The Last Lion is from speedy, multiple Gr.1 placed juvenile Mala Mala (Brief Truce), dam of three stakes winners and a stakes placed performer among her eight foals, all winners. She is a half-sister to Irish 1000 Guineas-Gr.1-Moyglare Stud Stakes-Gr.1 winner Tarascon (Tirol) and their multiple-winning dam Breyani (Commanche Run) is a half-sister to stakes placed Serene Look (Seattle Dancer), who raced with success in Australia and has left stakes winners Russian Caravan (Dehere) and Custard (Lonhro), the latter dam of Gr.3 winner Serene Majesty.

An €82,000 yearling racing for John Brown and Megan Dennis and described by Timeform in its essay in Racehorses of 2016 as “a good-quartered sprint type”, The Last Lion kicked off his career in the historic Brocklesby at Doncaster, running the 5f on a soft track in 1:04.90, quickening clear a furlong out and winning by 1.75 lengths with something in hand as 5/4 on favourite. He carried a penalty and was beaten a neck by US-trained Create a Dream over 5f at Ascot next time out but was demoted to third.

He was then twice second to Prince of Lir, over 5f at Beverley and then in the £100,000 Norfolk Stakes-Gr.2 at Royal Ascot on June 16, beaten half a length in the latter with veteran jockey Joe Fanning aboard. Franny Norton took the reigns for his next three outings, firstly when the bay colt won next time out, taking the Dragon Stakes-LR (5f) at Sandown on July 1 and then when second in the Molecomb Stakes-Gr.3 at Goodwood behind Yalta on July 27 and third to Blue Point in the Gimcrack Stakes-Gr.2 (6f) on August 20 at York.

The Last Lion was kept busy, easily accounting for Koropick in the Sirena Stakes-Gr.3 (6f) at Kempton on September 3 and six days later he was a dead-heat second with Legendary Lunch in the Flying Childers-Gr.2 (5f in 59.19) at Doncaster behind Ardad, both times ridden by Joe Fanning who was again aboard on September 24 when he lined up in the 10-runner Middle Park-Gr.1 (6f) at Newmarket. There were six Pattern winners in the field including favourite Blue Point (second), Richmond Stakes winner Mehmas (third) and Anglesley Stakes winner Peace Envoy (8th), one of three stakes-winning Irish raiders. Starting at 25/1, The Last Lion was well ridden out in front by Fanning, who was celebrating his 46th birthday, dictating the pace as the field raced into a strong headwind. Although Blue Point tackled The Last Lion over the final furlong the Choisir colt kept on “in now familiar never-say-die pattern (Timeform)” to win by three-quarters of a length and give his jockey, who had ridden more than 2000 winners, his first Gr.1 success.

It’s hardly surprising The Last Lion displayed such good juvenile form, emulating his sire in that respect as Choisir was out early in his first season on the track winning the historic Breeders’ Plate-LR (1000m) on debut. He had nine starts for the season, winning three, running second four times and was twice third. His other wins at two included the Skyline Stakes-Gr.3 (1200m) and the rich William Inglis 2YO Classic. He was runner-up to Victory Vein in the AJC Sires’ Produce-Gr.1 (1400m) and the Pago Pago-Gr.2 to Planchet and third in the Golden Slipper-Gr.1 and Champagne Stakes-Gr.1, being rated Champion 2YO Colt of 2001-02.

Choisir developed into an awesome sprinter at three, beating Spinning Hill in the VRC Lightning-Gr.1 (1000m) and Falvelon and Belle du Jour in the Linlithgow-Gr.2 (1200m) before his Newcastle-based trainer Paul Perry and connections made the historic decision to campaign the chestnut at Royal Ascot. Here, in the space of a week, he took the sprinting world by the scruff of the neck and gave it an almighty shake, emerging triumphant in the King’s Stand Stakes-Gr.2 (5f) and then a few days later in the Golden Jubilee-Gr.1 (6f), defeating Airwave, before finishing second in the July Cup-Gr.1 at Newmarket to Oasis Dream. He retired to stud for new owners Coolmore at Jerrys Plains in 2003 and Ireland in 2004. Although considered a four year-old in Great Britain, he was still at three year-old to Australian time and his effort to be crowned Champion Older Male Sprinter in GB in 2003 was a truly meritorious achievement and one that prompted a succession of successful challenges by Australian sprinters and others, doing much to lift the profile of the Australian thoroughbred in the process.

Choisir ($29,700 in 2017) has also become one of the very best of the reverse shuttlers and in addition to The Last Lion, his northern Gr.1 winners also include four-time Gr.1 winner Olympic Glory (IRE) (ex Acidenthera by Alzao (USA)), a champion at two and champion miler at three and four, who shuttles to Arrowfield ($16,500). He is also the sire of dual US Gr.1-winning miler Obviously (IRE) (Montjeu (IRE)), while his Australian-conceived son Starspangledbanner (Made of Gold (USA)) won the Oakleigh Plate-Gr.1 and Caulfield Guineas-Gr.1 before travelling to the stables of Aiden O’Brien in Ireland who trained him to win the Newmarket July Cup-Gr.1-Royal Ascot Golden Jubilee Stakes-Gr.1 double. He’s now overcome an early fertility hiccup at stud (84.2% in 2015) and is also on the Coolmore roster alongside his sire, standing at $16,500 and is the sire of Gr.1 winner (Prix Morny) and former shuttler The Wow Signal (ex Muravka by High Chapparal (IRE)) and Gr.2 winner Anthem Alexander (Night Shift (USA)) from his few early northern runners and ill-fated Gr.3-winning juvenile Of The Brave (Rory’s Jester) locally.

He’s by another underrated sire and one of Danehill’s greatest sire sons in Danehill Dancer (IRE) (ex Mira Adonde by Sharpen Up), a dual Gr.1 winner in Ireland at two who started out on a very modest fee at stud here ($7500), but eventually rose to be one of the most expensive sires on the Coolmore roster ($110,000 in 2008) in both hemispheres (12 local seasons), leaving more than 65 stakes winners including Private Steer, Steps in Time, Light Fantastic, Atomic Force, Arapho Miss and in the UK Again, Alfred Nobel, Esoterique, Legatissimo, Qemah, Speciosa and Where or When. His four-time Gr.1-winning son Mastercraftsman (IRE) (ex Starlight Dreams by Black Tie Affair) has left Gr.1 winners in Europe and NZ.

By the champion sire Danehill (Danzig-Razyana by His Majesty), Danehill Dancer’s pedigree is strong in influential US sire Native Dancer; sire of Northern Dancer’s dam Natalma (also third dam of Danehill), grandsire of Sharpen Up (dam sire of Danehill Dancer) and sire of Dancer’s Image, whose multiple Gr.1-winning daughter Lianga is third dam of Danehill Dancer. Choisir’s dam Great Selection is by the Gr.1-winning two year-old Lunchtime, who adds further strains of Hyperion (and his dam) to those present in Danehill Dancer and his second dam Pensive Mood, is a daughter of Biscay, also from the Star Kingdom branch of the Hyperion line. This could explain Choisir’s nick with Sir Tristram and his son Marauding (the former traces to Hyperion’s dam Selene and is inbred to her 5×4 and the latters is out of a mare by Biscay, by Star Kingdom). Another successful cross, with daughters of Encosta de Lago, shows his dam is by Star Way (GB) (another descendant of Selene) and his sire Fairy King is a brother to Sadler’s Wells (also strong on Hyperion, Native Dancer, Nasrullah and his family, as is Choisir).

Choisir has also shown a liking for returns of Danehill, Danzero for example who is bred on a similar Danehill/Star Kingdom cross as is Redoute’s Choice, who also brings in more Lunchtime. Choisir works well with Todman and his brother Noholme and many of his best runners have these sons of Star Kingdom in their pedigrees. Mares with similar breeding should also suit The Last Lion, whose dam sire Brief Truce (USA) (Irish River-Falafel by Northern Dancer) also shuttled here, leaving runners like Caulfield Cup winner Diatribe (by Desert Wine and tracing to Danehill’s second dam Spring Adieu), dual Gr.1 winner Red Oog (Zoffany (USA)) and Blue Diamond winner True Jewels (Lunchtime). 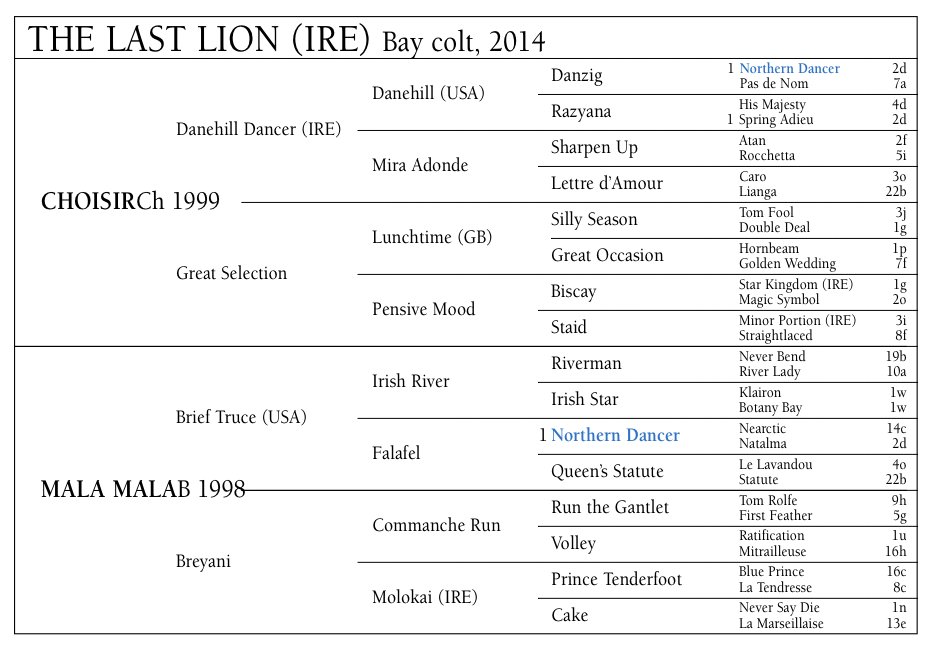 previous
All Too Hard Colt Brings $190,000
next
Some Marriages Seem Made In Heaven