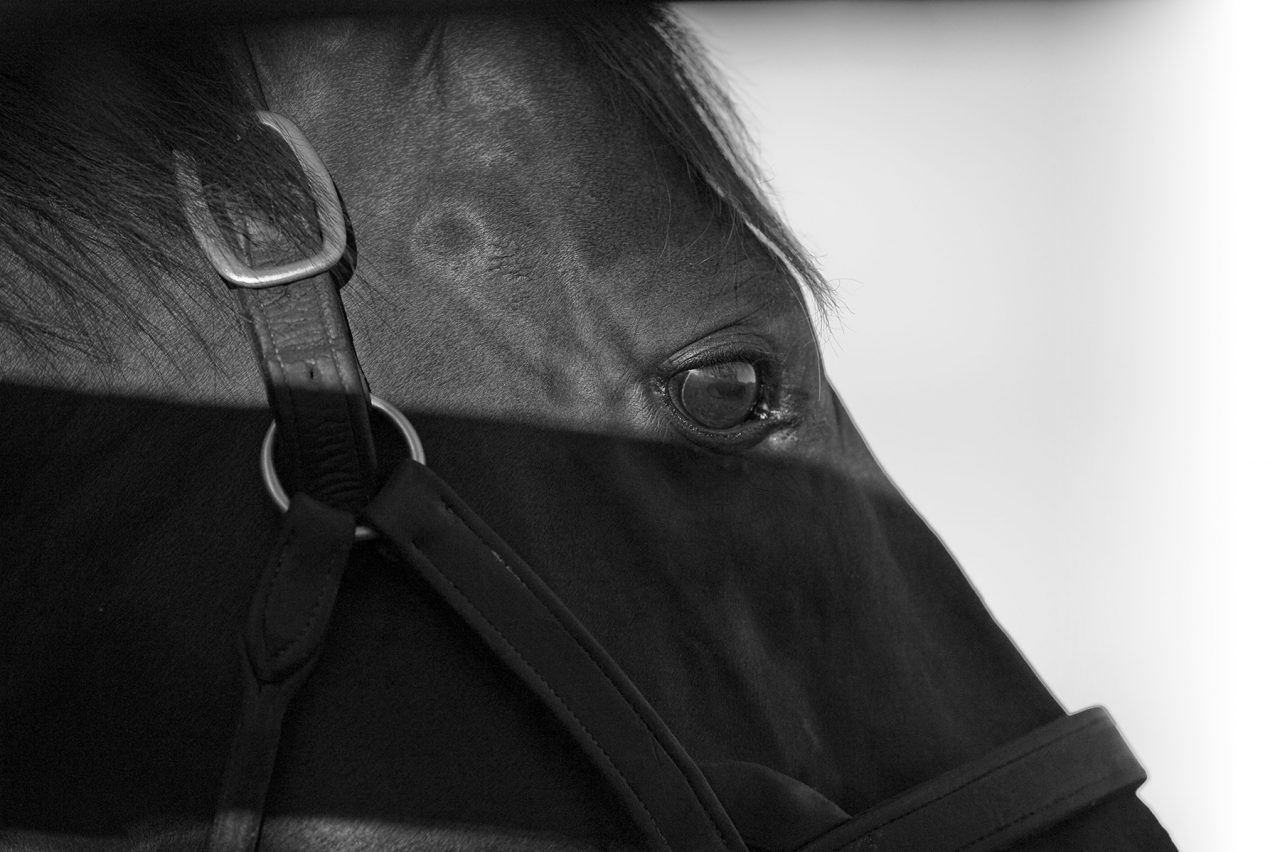 In the autumn of 1987, New York bloodstock agent Alan Quartucci signed for a 4-year-old Nijinsky II filly, Dancing Show, being sold by Ralph C. Wilson Jr, for $75,000 for New Zealand interests. She was bred to Miswaki on Southern Hemisphere time, and the resulting foal, named Umatilla, was a Group-1 winning 2-year-old in Australia in 1990. Dancing Show’s dam, Show Lady, was an unraced Sir Ivor daughter of the legendary broodmare Best In Show, and was a half-sister to Sex Appeal, already by then dam of Try My Best (sire of Last Tycoon) and El Gran Senor. She was also a full sister to a champion 2-year-old in Europe, Malinowski, as well as to Minnie Hauk (dam of Aviance for the Niarchos family) and Monroe (later dam of champion European 2-year-old Xaar, for Juddmonte), and a half-sister to Blush With Pride, a dual G1 winner herself and later granddam of Rags to Riches.

Dancing Show moved to Australia pretty quickly, and her next three foals were by Bletchingly and two of his sons who had both won the Golden Slipper, Star Watch and Canny Lad. In spite of having sired the legendary Kingston Town, who won three Cox Plates at about 10 furlongs, Bletchingly was a tremendous sprint sire, typical of the Star Kingdom line which ruled Australian racing for close to 30 years, and there’s absolutely no doubt the Star Kingdom influence is still a seminal part of the Australian racehorse; Canny Lad is the damsire not just of Redoute’s Choice, but of I Am Invincible as well. 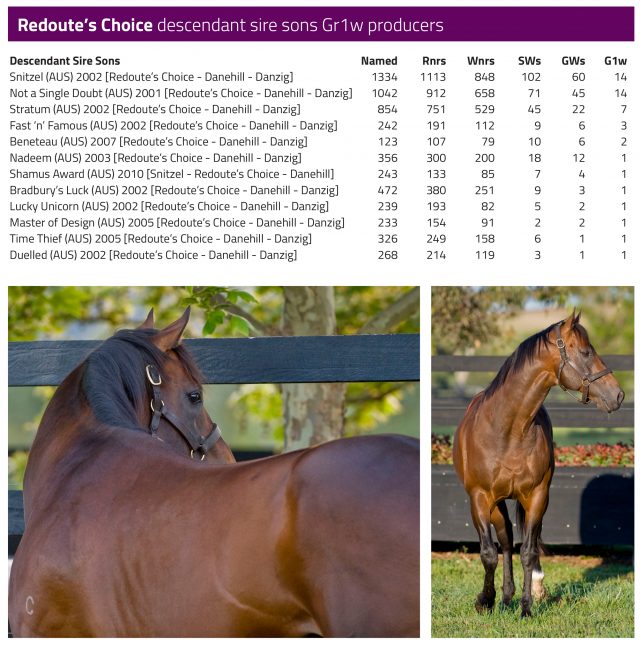 The Star Watch colt became Dancing Shadow’s second G1-winning 2-year-old, Hurricane Sky, so when his three-quarter sister by Canny Lad  came up for sale in Melbourne in 1994, she topped the sale, for $220,000, to the Sri Lankan businessman Muzaffar Yaseen, who was just putting his toe in the water in Australian racing. A certain John Messara was underbidder. Named Shantha’s Choice, she ran just twice as a 2-year-old, for a win and a second, and was bred as a 3-year-old to Danehill, who had originally been imported to Australia by, and stood his first six seasons in Australia at, Arrrowfield. So when Redoute’s Choice made his first appearance on a racecourse, in February, 1999, you can bet John Messara was paying attention.

In fact, that first appearance came in an 1100m Listed Race at Caulfield, the Veuve Clicquot S., and he won it. Not only that, he came back a week later in the G1 Blue Diamond, and he won that, too. Here’s how Messara puts it: “As for Redoute’s, he was destined to be a star in OZ  from his first appearance in a Listed 2yo race …big, precocious, fast, good looking and so powerful with a great temperament. One week later his trainer backed him up to win the GR1 Blue Diamond from an outside barrier. That says it all.” That was it as a 2-year-old: two-for-two, G1 winner (he was favourite for the Golden Slipper, but had to be scratched on the eve of the race with a fever). He came back at three to win three further Group 1’s, two at 1400m and the 1600m Caulfield Guineas, in which he defeated Testa Rossa and Commands. “Redoute’s Choice  was the stallion we had to have”, recalls Messara; “we thought he would be a company maker”.

How right he was. He was Australian Leading Sire three times, and at last count is the sire of 170 SW including 38 Group 1 winners. His second crop included five G1 winners, including future sires Snitzel (three times Leading Sire in his own right, and leading for a fourth at this writing), Stratum, and God’s Own; his third crop included six G1 winners, including Miss Finland, who won the Golden Slipper as a 2-year-old and came back the following spring to win the 1000 Guineas at 1600m, followed by the Victoria Oaks over 2500m. Arrowfield has the distinction of having stood three generations of champion sires from the same sire line (15 titles total and counting); this might never have been done before.

Redoute’s Choice had gone to stud in 2000 for $30,000, but by 2005 his fee had jumped to $220,000, peaking in 2007-2008 at $330,000. His influence has been immense. Snitzel has been three times Leading Sire, and, as mentioned is the leader, at this writing, in a three-way battle with Pierro and I Am Invincible for this season’s title. Not A Single Doubt, only a Listed winner from “Redoute’s” first crop, stood his first six seasons at Arrowfield for $13,750 but emerged as a consistent top five sire of 2-year-olds, is chasing Snitzel for the 2-year-old sire championship this season, including G1 Golden Slipper winner Farnan, and stood last season for $110,000 before he had to be retired from covering.

A number of other sons of Redoute’s Choice have been good sires as well. Stratum, who stood at Widden Stud, actually topped Snitzel as Leading Sire of 2-Year-Olds in their first season with runners, 2009-2010. Beneteau, winner of the G3 Blue Diamond Prelude and third in the G1 Blue Diamond itself, had only two crops at Arrowfield before dying, but was going to be a very good sire, with 13 A Runners in those two crops. Burgundy, who died late last year, and Nadeem, in New Zealand, have been useful sires; Burgundy is the sire of Brandenburg, a current 3-year-old who won the G2 Hobartville S. in February and has since run third in the G1 Randwick Guineas and the G1 Doncaster H.

Arrowfield stands two more sons of “Redoute’s”. Pariah, also a dual G3 winner and second in the G1 Blue Diamond, has his first foals on the ground, and Messara is rapt: “some of the best foals on the farm”, he says. “But the big daddy of them all”, says Messara, “will be The Autumn Sun….like his dad , he could do things that most equine athletes would have been incapable of matching…..and he has the looks and the pedigree”. Winner of the G1 JJ Adkins at two, The Autumn Sun, who is out of an Aga Khan Galileo half-sister to the top racehorse and sire Azamour, won four G1 races at three in 2018-2019, including the 1400m Golden Rose, the 1600m Caulfield Guineas in the spring and 1600m Randwick Guineas in the fall, followed up by the 2000m G1 Rosehill Guineas, finished with eight wins in nine starts, hands down the Champion 3-year-old of his crop, and retired to Arrowfield in 2019 where he stands for $66,000 in 2020

Redoute’s Choice’s 38th Group 1 winner is this season’s dual G1-winning 2-year-old, the aptly named King’s Legacy, winner of the 1400m Sires’ Produce and the 1600m Champagne at Randwick in April. A $1.4-million Magic Millions yearling bought by James Harron, who found Pierro and Capitalist in previous forays into the yearling market, King’s Legacy is out of the stakes-placed Hussonet mare Breakfast in Bed. She is a half-sister to the G1 winner and four times G1-placed (all against colts) filly Oohood. The next dam is by Sunday Silence and is a half-sister to the top sire Not A Single Doubt (also, of course, by Redoute’s Choice), and the next dam produced the influential sire Snippets. Now spoken for by Coolmore, King’s Legacy goes into winter quarters for a hugely promising 3-year-old campaign, but no matter what happens, with that pedigree and being in fact the only dual G1-winning 2-year-old by Redoute’s Choice, he’s already a top sire prospect.

Finally, we should note the sire sons of Redoute’s Choice’s two best sons to date, Snitzel and Not A Single Doubt. Snitzel is the  sire of F2015 Shamus Award, sire of G1 winner Mr Quickie; F2016 Wandjina, sire of 2020 G2 winner and G1 Golden Slipper and G1 Sires’ Produce third Mamaragan; and F2017 Spill the Beans, second on this season’s Freshman Sire list, but who unfortunately died late in 2019, just after he’d sired his first winner. Among the top prospects Snitzel has in the pipeline are Newgate’s dual 1100m G1 winner Russian Revolution ($44,000 in 2020) and Aquis’ G1 Sires’ Produce winner Invader ($22,000), who both have their first foals on the ground; and Widden Stud’s Trapeze Artist ($77,000), a four-time G1 winner from 1200m-1400m who covered his first mares in 2019. Not A Single Doubt is the sire of Extreme Choice, another top prospect from Newgate; he won the 1200m G1 Blue Diamond at two and the 1000m G1 Moir at three, and stands for $22,000, which looks good value considering he is number four among first-crop sires by 2020 yearling average, with 33 yearlings having averaged $138,853 – over six times his stud fee. Not A Single Doubt is also sire, of course, of this year’s G1 Golden Slipper winner Farnan, another top sire prospect.