The autumn in Europe has been very wet, with racecourse surfaces turning soft or even heavy. There is no doubt that soft underfoot conditions change the complexion of racing, not all for the better. Good horses defect from good races and those that stand their ground are frequently compromised to one degree or another. But as they say, every cloud has a silver lining. And some of that silver lining was on show during the recent British Champions weekend, which is frequently staged on soft underfoot conditions. The grand old sire Pivotal emerged with much credit on the day, siring two winners in Addeybb, who put up a career best performance to land the Gr.1 Champion Stakes, and Glen Shiel who took the Gr.1 British Champions Sprint Stakes from Brando, another son of Pivotal. The veteran Cheveley Park stallion covered 25 mares in his 24th covering season earlier this year at the ripe old age of 27.

When the going gets soft, the Pivotals get going. That would be an over simplification of his stock’s preferred ground conditions. True, he’s been long renowned as a sire whose runners can handle wet conditions, but he’s also had plenty who are quite comfortable on fast summer turf. His British Champions day successes did perhaps mark the end of an era, as it is hard to visualise another day where he will sire a new G1 winner to add to his admirable tally of 33.

Pivotal built his reputation the hard way, starting out as a £6,000 stallion after he landed the Gr.2 King’s Stand at Royal Ascot and signed off with a victory in the G1 Nunthorpe, performances that earned him a Timeform mark of just 124. His early mares played to his strengths as a sprinter and he hit the jackpot with his very first crop of runners, siring the brilliantly fast Kyllachy, who proved to be a more gifted sprinter than his sire, graduating from handicaps to earn a Timeform rating of 129 for his win the 2002 renewal of the G1 Nunthorpe. Pivotal is demonstrably a speed influence – the stamina index of his runners being significantly shorter than that of their siblings. But he also showed early on that he could get a very good horse at up to a mile-and-a-quarter, the Gr.1-winning fillies Golden Apples and Silvester Lady being two fine examples from his initial crop of runners. That inevitably led to more stamina and class among his future books, to the point that his top ten runners by Timeform rating now feature horses with maximum winning distances ranging from five to over 12 furlongs. The 128-rated Avilius was probably his best known Australian galloper before Addeybb twice defeated Verry Elleegant at Gr.1 level back in March. Addeybb earned a 129 rating for his latest G1 victory at Ascot, which puts him level with Kyllachy, two pounds behind Pivotal’s best ever runner Farhh.

Pivotal’s influence is now being passed down through is sons and daughters at stud. He has found at least two very worthy sire sons in the France-based Siyouni and Darley’s Farhh, whose career has been compromised by low libido. And, judging by the results of some of this autumn’s big European races, Siyouni’s offspring are, like the Pivotals, adept at handling soft ground. His son Sottsass was least inconvenienced by the wet conditions present at Longchamp on Arc day when taking that feature race and his Champion two-year-old-elect St Mark’s Basilica also handled soft conditions admirably in the G1 Dewhurst.

Pivotal has sired 149 Stakes winners from his Newmarket base, which is second only to Dubawi among British sires since Pattern racing began. And this tally is not simply down to longevity alone. His Stakes winners have been produced at an excellent rate of 11% to runners, a standard so rarely achieved nowadays due to large books. Quite remarkably, Pivotal is even more effective as a broodmare sire. He holds the British record for most G1 winners in a calendar year, his daughters producing ten in 2017. Moreover, the 107 northern hemisphere Stakes winners out of Pivotal mares have been produced at an excellent rate of 6.0%, well in advance of the average score for the stallions that sired them. And when we focus on his achievements from his elite daughters, his numbers are even more impressive. There have been 59 Stakes winners produced from elite daughters of Pivotal and they have been produced at an astonishing rate of 12.4% to runners. 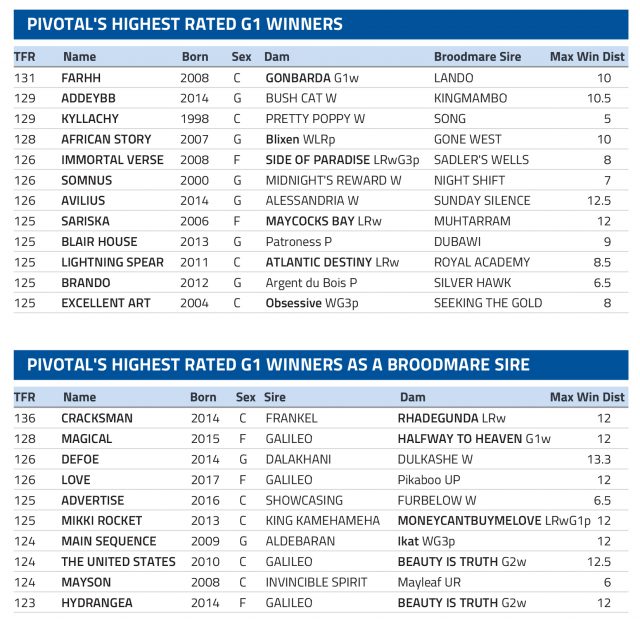 This concentration of quality is all the more impressive when we learn that the average for the sires who covered them – and they are all good stallions – is 8.9%. It is also ahead of Galileo’s 9.8% Stakes winners from elite mares. In fact, it is so good it gets close to Darshaan’s 14.9% and Danehill’s 15%, two of Europe’s greatest broodmares sires in recent times. It is with Galileo that Pivotal’s daughters have forged a particularly strong partnership. Thus far, a remarkable 41% of the 29 runners by Galileo out of Pivotal mares are Stakes winners. And he has a 36% strike rate with Galileo’s young sire son Frankel. It’s also notable that when you introduce Galileo blood to a stallion that already carries Pivotal and Danehill, as Siyouni does, you get the likes of Sottsass and St Mark’s Basilica.