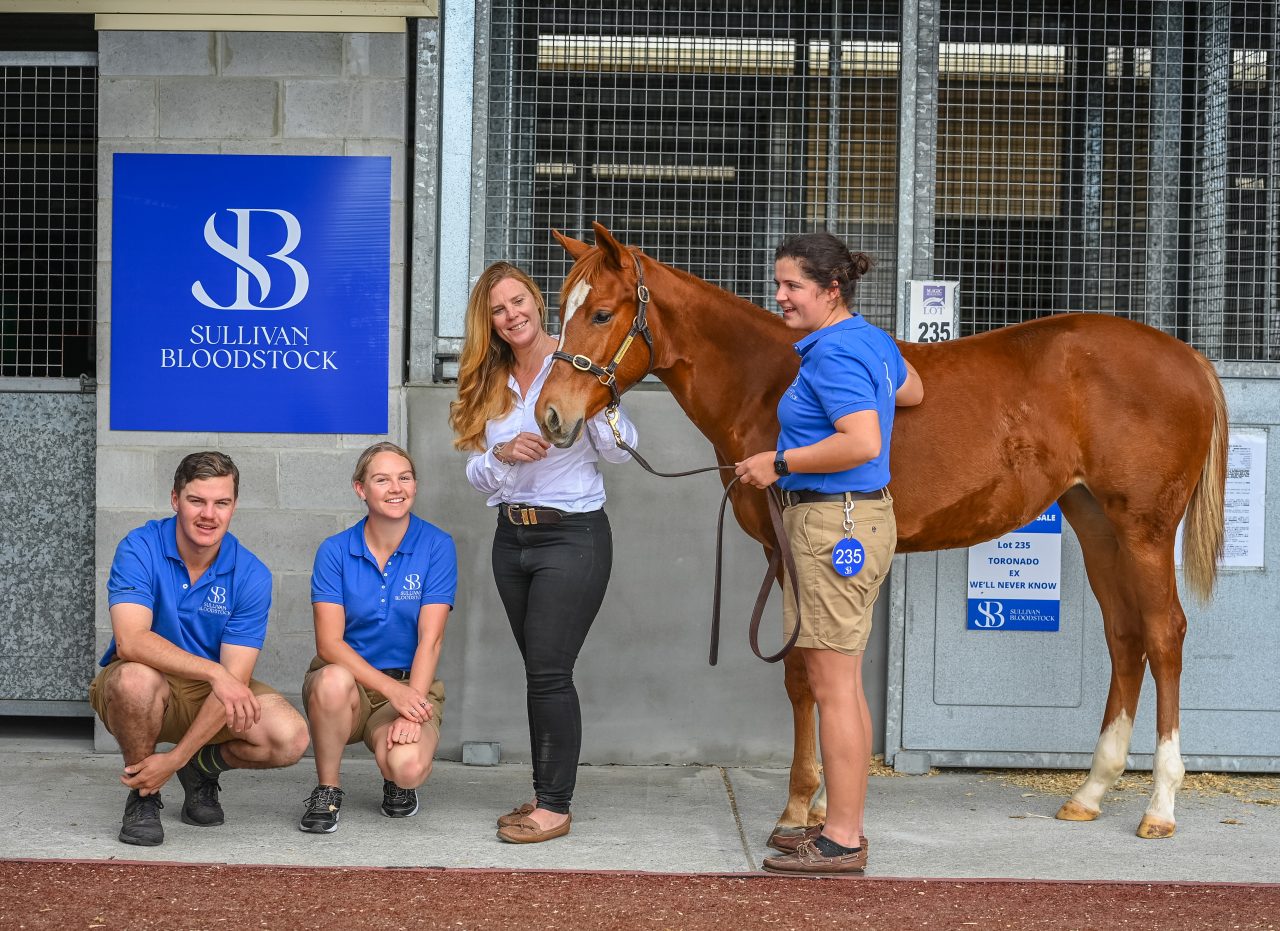 For the first time at the Magic Millions Gold Coast Yearling Sale a distinctive blue and white “shingle” will adorn the Chester barn welcoming buyers to inspect the maiden yearling draft of Sullivan Bloodstock. In time owner Sherah Sullivan believes the logo will become synonymous with high-end quality, her six January offerings being excellent examples of the boutique calibre horse her farm will offer.

Sherah’s journey in Thoroughbreds began in her native Matamata in pony clubs before starting work with yearlings as a fifteen year-old at JK Farm down the road from home. In between then and starting her own business in 2021, Sherah spent time travelling the world learning from the best people and horses in Ireland, England, France and America, working the various sales before landing in Australia at Arrowfield Stud. “I was then really fortunate to get a foot in the door managing Noorilim Park for quite a few years before branching out on my own.”

The horse tasked with leading off the Sullivan Bloodstock draft is lot 85, an impressive colt by the ever-reliable Smart Missile out of the American bred mare Golden Phoenix. A granddaughter of A.P. Indy through her sire Suave, Golden Phoenix won five times from 4 ½ to 7 furlongs and was twice Stakes placed. She hails from a strong American family, but the pedigree is truly international with the G2 Edward Manifold Stakes winner Bring Me Roses (High Chaparral) and the G2 Bobbie Lewis Stakes winner and sire Face Value (Red Ransom) tracing back to the prolific broodmare Ivory Maid (Sir Ivor) who also appears in the tail female line of this colt. Speaking about the colt Sherah explained, “There is a lot to like about this colt, he has plenty of substance and is an exceptionally good looking individual who will be sure to catch the eye of trainers. He’s a great mover and is a horse that has come to hand very quickly. He is thriving on the prep and the work that we have set him which is something I love to see.”

Glamour colt Anamoe has finally delivered Street Boss the kudos he deserves, and buyers have their choice of a colt and a filly by him from Sherah’s draft. The colt will sell as lot 240 and is out of the New Zealand bred mare Mamasan, three times a winner in her homeland. Amongst her earlier foals is the Melbourne listed winner and G2 placed Pure Pride (Shocking) and the listed placed Acquisto (Thewayyouare). Another foal is the three year-old Unencumbered filly Princess Biddy who showed tremendous ability finishing third in the listed Wanganui Guineas when making her debut. Mamasan is a Shinko King full sister to the G3 Taranaki Cup winner Madame Shinko from the family of dual Australian G1 winner Srikandi (Dubawi). Sherah has a big opinion of this fellow saying, “This colt should be highly sought after, and rightly so. His dam Mamasan is somewhat a blue hen mare now and I know Chrissy Bambry holds his half-sister Princess Biddy in very high regard. The mating has picked up on an already successful Street Cry cross that we saw in Pure Pride, and I have no doubt that this horse can add further black type to the already glittering pedigree. He is very much a Street Boss, extremely well balanced, short coupled and light on his feet.”

The other Street Boss is a chestnut filly with an August foaling date that sells as lot 139. She is out of the three-time winning Shamardal mare Inflection, a half-sister to the listed winner Choice Words (Choisir) who would later foal the speedy I Am Eloquent (I Am Invincible), a Melbourne listed winner and G2 placed in Adelaide. Of this filly Sherah said “She is incredibly strong for a filly and has traits which I have seen consistently in high performing race fillies. They have that workmanlike way about them with an underlying bit of grit.

I think this filly has that and I look forward to seeing in whose hands she will fall. Both of mine by Street Boss have a remarkable resemblance.”

Flying Artie’s first crop certainly made their mark and Sherah offers a colt well-qualified to match the deeds of the likes of Artorius. Lot 614 is the first foal of the once raced Written Tycoon mare Tennessee Tycoon, a half-sister to Pergram (General Nediym) who won the listed Queen Adelaide Stakes at two. Their dam Tennessee Royal (Royal Academy) is out of the grand producer La Nebbia (Zephyr Bay) who foaled the tough G3 winner and G1 placed Nina Haraka (Fraar) who in turn dropped the listed winner and G1 Thousand Guineas runner up Extension Of Time (Dash For Cash). Another daughter of La Nebbia was Nina Haraka’s full sister Monte Rosa, dam of the G1 Lightning Stakes winner Snitzerland (Snitzel) and her full brother the G3 winner and sire Sooboog. It is plain to see this colt comes from a family that oozes speed. “This horse has a lot of quality about him and he is extremely athletic.

He has a terrific hindquarter on him and is a horse that I feel will continue to thrive in the prep. He is very straight forward and has a great demeanour about him. He also possesses the Written Tycoon influence which will only add to his appeal,” Sherah explained.
Sherah will offer a lovely filly that should be at her best over a short course being by Champion sprinter Harry Angel out of Tiny Taj, a daughter of the Golden Slipper winner Sepoy. Tiny Taj only faced the starter five times, but recorded three wins from 1000 to 1200 metres. She is one of six winners out of Rinky Dink (Distorted Humor) who will be best remembered as having won the G1 Australasian Oaks, but it should be noted she also won the listed Ottawa Stakes, the juvenile fillies sprint on Melbourne Cup day, so she too clearly came to hand early. As a broodmare she spread her influence getting the G2 QTC Cup winner and sire Galah (Redoute’s Choice), a sprinter, and the G1 Queensland Oaks runner up Pygmy (New Approach). Clearly this filly has impressed Sherah, “This filly is a beauty, she’s very feminine with a beautiful head and has a lovely loose walk. She covers the ground with little effort, and I love to see horses move like her. I feel she is a really exciting addition to our draft by a very exciting first season sire.”

The last of the Sullivan Bloodstock draft to take the stage will be lot 823, and as a son of Champion Sire Written Tycoon, he’s bound to be popular. He is the second and final foal of the Pierro mare Boscobella who was placed in Brisbane. Boscobella was out of Georgette Silk (Flying Spur) who was precocious enough to win the listed Widden Stakes at two. Again this is another jump and run family for further back can be found the G1 Allan Robertson Fillies Futurity Stakes winner Sydney’s Dream (Bletchingly), the G3 Gimcrack Stakes winner Marskin (Marscay), her daughter Donna Natalia (Anabaa) who won the same race and was placed third in the G2 Silver Slipper, and G1 The Galaxy winner Charge Forward (Red Ransom) who has had such an impact on the Golden Slipper as a broodmare sire. This is also the family of the top Hong Kong performer Southern Legend (Not A Single Doubt).

“This colt has a lot of presence and is a powerhouse of a horse. He has a strong shoulder and forearm along with a huge gaskin and hindquarter. He also possesses a beautiful head with a soft, kind eye and has a terrific temperament and constitution. He’s a lovely horse who will present himself well up at the Gold Coast.”

So there you have the farm’s first six yearlings worthy of a trip over to the Chester barn to inspect, and all ready to make the Sullivan Bloodstock brand instantly recognisable.