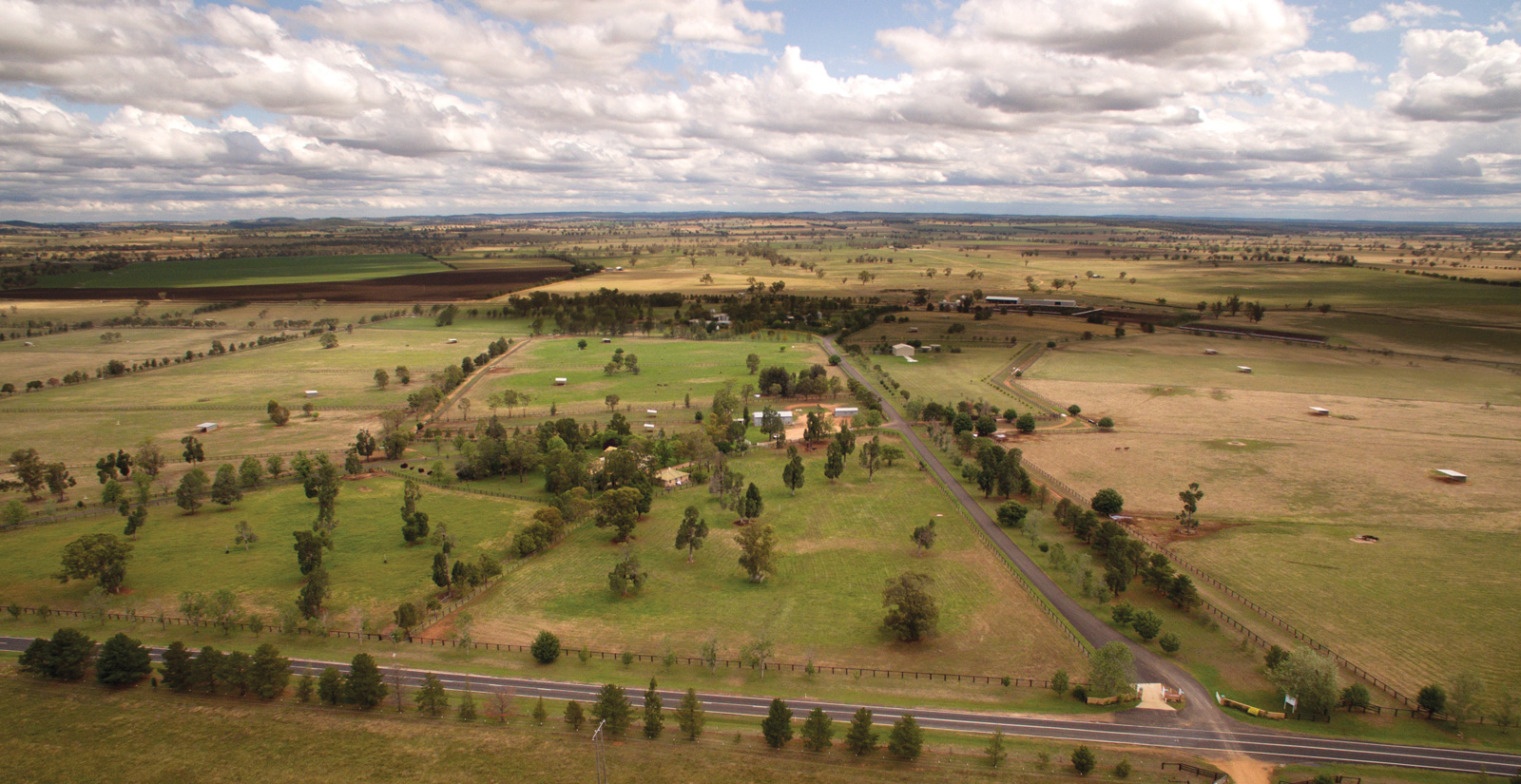 For over forty years now George Altomonte’s Corumbene Stud has been producing truly outstanding Thoroughbreds. Few, if any, studs of comparable size can keep pace with the success rate of Corumbene, breeders of the likes of Golden Slipper winners Sebring and Overreach and of the Blue Diamond winner True Jewels along with Heart Ruler and Menari.

And the “tradition” continues to today with the excitement around glamour three-year-old Standout and the untapped potential of Bottega.

As the pre-eminent yearling sale in the Southern Hemisphere it is essential to gain entry into the Inglis Easter that the horse brings with it the best of pedigree and physique. The twelve strong draft from Corumbene for the 2020 edition deliver both in spades. In all his years as Stud Manager at the Dunedoo farm Toby Frazer hasn’t seen a draft to better what Coumbene will take this year to Riverside. “I couldn’t separate most of them, they’ve all developed into beautiful, loose walking specimens I’d be happy to talk home myself. If I had to pick one it would be the colt out of Bahia, he is something special” said Frazer.

And if you will pardon the very poor pun, Lot 342 is the “standout” of an excellent draft. By Exceed And Excel out of the unbeaten daughter of Snippets in Bahia, by the time of publication this colt may be a full brother to two Gr.1 winners. His sister Overreach was the Champion 2YO Filly in Australia thanks to her win in the Gr.1 Golden Slipper and his brother Standout will contest the Gr.1 Canterbury Stakes over the Sydney Autumn Carnival, and given the ease with which he disposed of a classy field in the Gr.2 Expressway Stakes, a Gr.1 win is but a matter of time. Besides Overreach and Standout, the colt is a full brother to Outreach who was second in the Gr.3 Canonbury Stakes behind Vancouver at his only start and now stands at Widden Stud, while Bahia is a half-sister to the Gr.1 Blue Diamond Stakes winner Reward For Effort, again the result of a mating with Exceed And Excel.

As mentioned, on the honour roll of Corumbene bred Gr.1 winners is another Blue Diamond Stakes winner in True Jewels and the stud will offer an impressive I Am Invincible colt out of her Danzero half-sister Loveday as Lot 40. Loveday’s first two foals to race have been winners and her two-year-old Mendooran, a full brother to the Easter yearling, was beaten just a nose at his second start recently. There is plenty happening in this family with the promising Betcha Flying (Uncle Mo) picking up black type over the Melbourne Spring carnival and her half-sister High Low Bet (High Chaparral) going back-to-back in Sydney last month.

Like Exceed And Excel and I Am Invincible, Not A Single Doubt is a proven source of Gr.1 winners and Toby and his crew will lead up two fillies by the recently retired son of Redoute’s Choice. Lot 381 out of the More Than Ready mare Cheetara is a full sister to Single Bullet, winner of the Gr.3 Pago Pago Stakes at two. This is a page laced with black type winners, Cheetara’s dam Dashing Eagle dead-heating in the Gr.1 Flight Stakes before winning the Gr.1 One Thousand Guineas, and her dam La Caissiere (Luskin Star) won the Flight when it was a Gr.2 and the Surround Stakes at the same level. More recently this is the family of the ever-dependable, multiple Group race winner Osborne Bulls (Street Cry). This filly is bred on the same cross as Gr.1 winner Miracles Of Life.

It is well documented that Sebring was a product of Corumbene as was his half-sister Falkenberg whose first foal is the other Not A Single Doubt filly in the draft, Lot 431. Twice a winner up to a mile but more significantly third in the Gr.1 Queensland Oaks, she clearly had an abundance of ability to pass on to her progeny. Interestingly, Falkenberg may have outrun her pedigree with that Oaks placing as the rest of the page is speed from the likes of Gr.2 San Domenico Stakes winner Surtee (Memento) and Gr.2 Silver Slipper Stakes winners Giostra (Imperial Prince).

Golden Slipper winning colts almost always make it as sires, think in recent years, Pierro, Sebring and Stratum, and early indications are Vancouver will be just as successful. Corumbene will offer a pair of smashing colts by the 2015 Slipper winner, the first Lot 279 out of the twice winning Exceed And Excel mare Walkway. Now the dam of two winners, Walkway is a granddaughter of North Bell (Bellwater), dam of the Champion Northerly and the Group winning sprinters North Boy and Northern Song (both Rory’s Jester).

The other Vancouver colt is a grandson of the Gr.1 One Thousand Guineas/VRC Oaks double winning mare Arborea (Imperial Prince). The colt is out of the twice raced Encosta De Lago mare Inchita who is four from four winners to runners and is a half-sister to the Grade 2 Del Mar Handicap winner Delta Form. The colt will sell as Lot 499.

And with speed in mind the Dunedoo stud will send to market two colts and a filly from the first crop of the 2016 Slipper winner Capitalist. All three will sell during the second session with a black or brown colt out of the Lonhro mare Cloak Of Night the first as Lot 385. This is speed on speed as Cloak Of Night won three times, all at 1000 metres, and her half-sister Beatitude was Listed placed at two despite being by Quest For Fame. Cloak Of Night’s first foal, a son of Hinchinbrook, is knocking on the door in New Zealand.

He will be followed by Lot 398, a filly first foal out of the Redoute’s Choice mare Damedge who won four times up to a mile. Damedge is a half-sister to Vintedge (Flying Spur) winner of the Gr.2 Matriarch Stakes at Flemington, and to the Adelaide Listed winner Youths Edge (Jeune). And the family struck again this season when Every Rose (Choisir) won the Gr.3 Gimcrack Stakes, her dam Couredge a half-sister to Damedge. This is also the family of the Gr.1 winners Racer’s Edge (Rory’s Jester) and True Steel (Jeune).

The remaining Capitalist colt hails from the same family as the I Am Invincible colt mentioned above, tracing as he does back to Marks Gain (Lunchtime) who carried George’s orange, brown and white colours to victory in the Black Opal Stakes.

Her daughter Occasional Gain produced True Jewels and her half-sister Wager (Flying Spur) who won a pair of Gr.2’s and had the talent to be runner up in the AJC Sires’ Produce, Champagne and Blue Diamond Stakes’ all at Gr.1 level. To sell as Lot 494, this colt is out of the Tale Of The Cat mare Icedginger, a granddaughter of Occasional Gain, and dam of the Listed Fireball Stakes winner Samantha and two other winners from three foals to race.

Corumbene will also offer three fillies by young stallions carving out reputations as successful sires in Rubick, Shooting To Win and Dissident.

One would recommend not being late for day one of the sales as the Corumbene bred filly by Rubick out of the Flying Spur mare Katharos will go through as Lot 2. Her once raced dam is out of the Listed winner Isurava (General Nediym) making her a half-sister to the handsome brute that is Menari (Snitzel). A little further back in the pedigree is the Gr.1 One Thousand Guineas winner Whisked, better known as the mother of the incomparable Tie The Knot (Nassipour).

The Shooting To Win is a also a filly, a half-sister to Godolphin’s impressive Gr.2 J H B Carr Stakes winner Laburnum (Denman) from the family of the Gr.1winners Grand Armee (Hennessy), Drum (Marauding) and Anamato (Redoute’s Choice) while the Dissident is a half-sister to four winners out of the three time winning Dehere mare Emissary, herself a daughter of the Altomonte bred and raced Heart Ruler (Marscay), winner of the Gr.1 The Metropolitan.

Toby and his team will be proud to show you any of their dozen offerings in Barn E at Riverside, all with the potential to add to the list of Corumbene Champions. ©