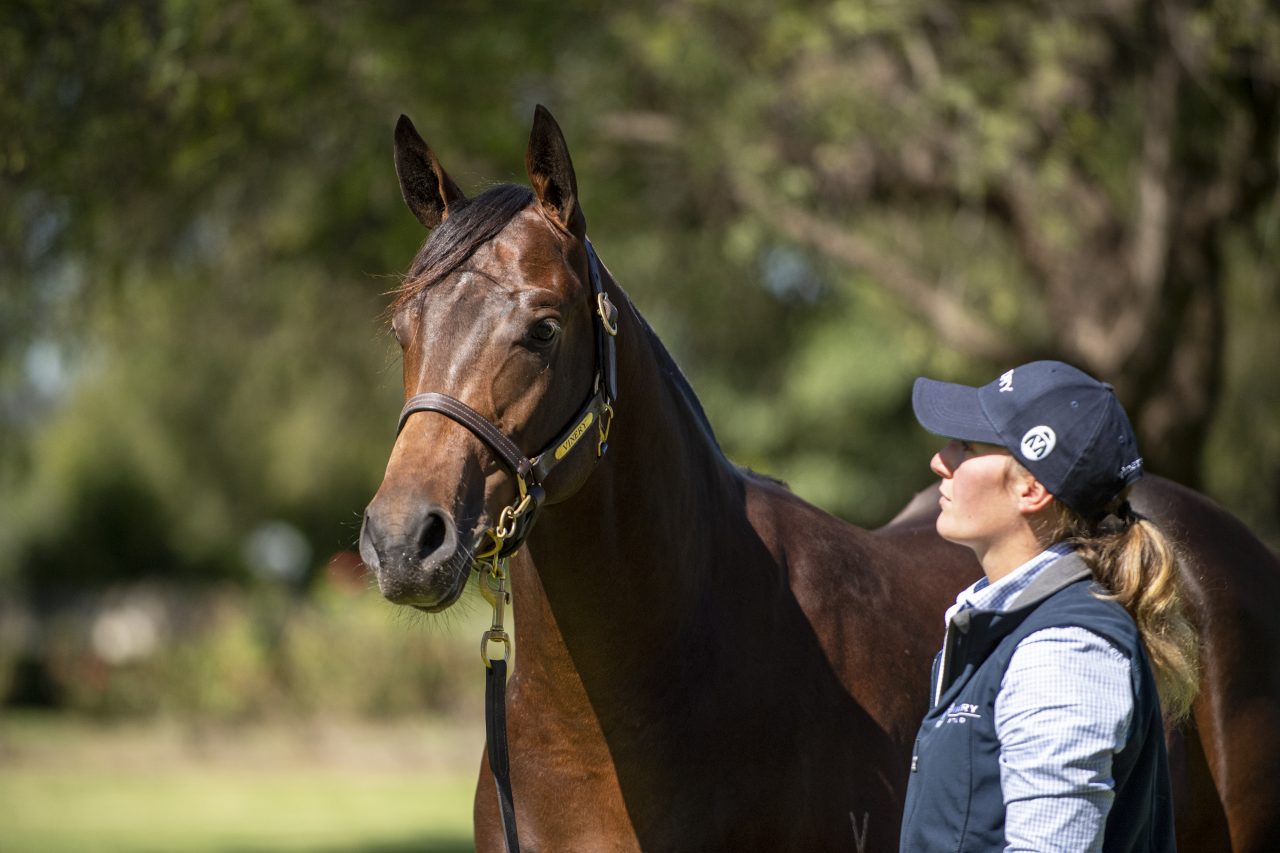 Bluebloods asked Vinery’s Adam White what puts the magic into this race and sales series?

The whole carnival atmosphere really. It’s always great to see people enjoying the Gold Coast and a lot get to share it with their families. During the sales it’s always nice to see people having success in the sale ring. And then on Saturday there are so many success stories for breeders, owners, trainers, etc. during what is a fabulous day’s racing and with sensational prizemoney on offer.

With twenty-nine yearlings in their 2022 draft by a spread of fifteen sires, there is plenty of early speed on offer, highlighted by two colts by one of Australia’s hottest sires: I Am Invincible. Lot 39 is a half-brother to five-time G1 winning sprinter Santa Ana Lane, out of winning mare Fast Fleet (Fastnet Rock), while Lot 911 is out of G1 winner Diademe (Savabeel), who has already left two-year-old Stakes winner Unition and G2 placed Conqueror in her first two foals to race.

The progeny of Snitzel always attract plenty of attention and Vinery will offer Lot 805, a half-sister to G1 Australian Oaks winner and New Zealand Bloodstock Filly of the Year, Sofia Rosa who is out of well related Bislieri (Encosta de Lago); and Lot 158, a half-brother to G3 winner Felines, and Stakes placed Domesticated, out of Jellicles (Tale of the Cat), a city winning half-sister to Singapore Champion Better Than Ever.

Vinery’s All Too Hard has had a massive last couple of seasons siring the likes of G1 winners Behemoth, Alligator Blood, Forbidden Love and Hong Kong sprinting star Wellington. Vinery will present three colts and a filly by All Too Hard. The colt, Lot 387, is a half-brother to Stakes placed winner Maurice’s Medad out of Presslist (Librettist), a half-sister to Vinery sire and G1 winner Press Statement, and to G1 winner Pressday. A half-brother to Stakes placed city winner La Scopa, Lot 738, is out of Stakes placed winner Amalfi Dream (Testa Rossa), who is a half-sister to G2 winner Drumbeats; while the other colt, Lot 866, is the third foal of city winner Cocoexcel (Exceed and Excel) from the Headturner family. The All Too Hard filly in this draft is Lot 394, out of Proposal (More Than Ready), a winning daughter of G1 winner Sacred Choice.

More Than Ready has been a stalwart for Vinery with 212 Stakes winners. Vinery will offer four of his yearlings at Magic Millions; led by the exciting prospect, Lot 470, a brother to G1 placed, Listed winner Better Than Ready, and to Stakes placed winner Sally’s Day; both out of city winning mare Sally’s World (Agnes World), who is a half-sister to Group winner Publishing and Listed winner Miss Mooney Mooney. We all know how well American mares succeed down here, and Lot 604 is a half-brother to G3 winner Blueeyesintherein, out of two-year-old winning USA mare Tartufi (Mr. Greeley). Lot 449 is a colt out of Hussy By Choice’s tough city winning full sister Rosenet (Hussonet) from the family of Castelvecchio, Maid of Heaven and Planet Ruler; while Lot 152 is a colt from Ivory Rose (Green Desert), an imported mare from the family of Lope de Vega.

With his oldest crop only three-year-olds, Star Turn continues to demonstrate what an exciting young stallion he is with the likes of Miss Hipstar and Startantes. Vinery will present two colts by their young sire at Magic Millions, including Lot 754, a half-brother to Stakes placed three-year-old Roots, from Arctic Success (Big Brown), who is a half-sister to G1 Golden Slipper winner Polar Success. Lot 680 is a Star Turn colt out of Warm Charge (Commands), who is a young unraced daughter of Stakes winner Warm Smytzer.

Three fillies and a colt by Zoustar are bound to grab the attention of good judges, with all of them having quality pedigrees, led by Lot 530, a half-sister to Listed winner Miss Hipstar (Star Turn) and Group placed winner Still Single, out of Listed winner Single Style (Not A Single Doubt). The filly, Lot 88, who is the second foal of Graciousness (Street Cry), a winning half-sister to Vinery stallion Casino Prince, from one of Australia’s greatest Stakes producing female families. A half-sister to dual G3 winner Native Soldier is Lot 796, and she is out of G2 Sapphire Stakes winner Belong To Many (Belong to Me) who won eight races. The Zoustar colt, Lot 177, is the first foal of G3 Thoroughbred Breeders Stakes winner Khulaasa (Epaulette), herself a half-sister to Listed two-year-old winner Bulbula (dam of Aryaaf who won the G3 Ottawa Stakes).

A Dundeel daughter of G1 Toorak Handicap winner Allez Wonder (Redoute’s Choice), Lot 911, is a half-sister to G3 winner Kooweerup and Group placed Prompt Prodigy and heads up a trio of Dundeel fillies in the Vinery draft. A close relative of G1 two-year-old Yourdeel is Lot 4, who is also a half-sister to G3 SAJC Breeders’ Stakes winner Broadband, dam of this season’s Group placed two-year-old Drisana, from the family of Anamoe. The other Dundeel filly is Lot 478 from Satya (Redoute’s Choice), a young winning daughter of G1 winner Star Satire.

Do you wear budgie smugglers or board shorts to the beach?

An Indian restaurant on the Gold Coast actually. www.getitindia.com.au

What is the most important object you own?

A little ashamed to say my phone. It’s difficult to function when it’s not there, although sometimes enjoyable.